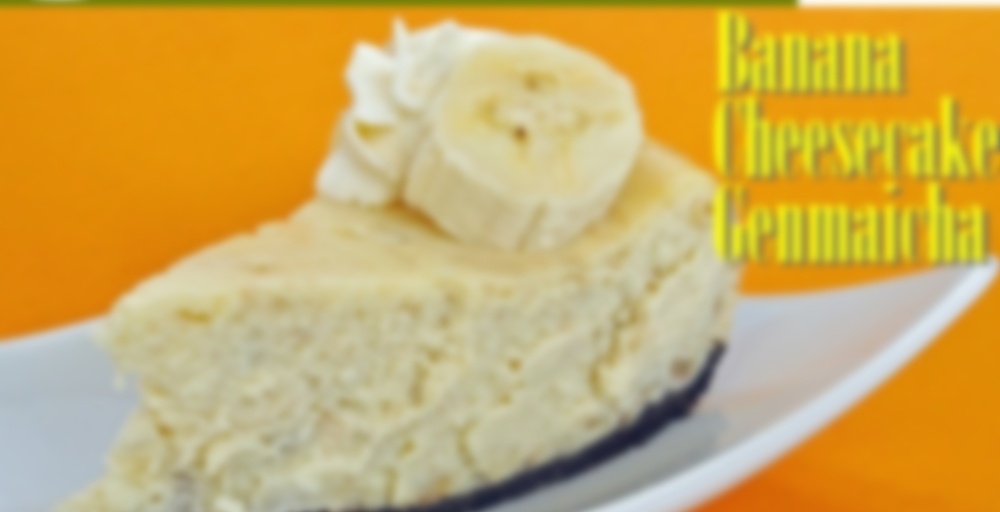 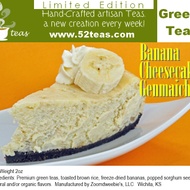 Following the success of our Marshmallow Treat Genmaicha, I’ve decided to try another genmaicha blend. The toasted rice element in genmaicha seems to make it okay to blend it with flavors like cheesecake and banana. (Normally I tend to think of fruity green teas, but I think the genmaicha is more agreeable with ‘heavier’ flavors like cheesecake and banana.) Of course, you, our customer will have to be the final judge. This being a cheesecake blend, and given the historical swiftness with which our cheesecake blends disappear, I did make a little extra of this, but don’t drag your feet, it won’t last long.

I just got mine today! It’s a big day for tea, wheee! I always miss out on the marshmallow genmaicha so I thought I would check this out instead.

So the aroma of this is very strong in the bag. I steeped it for around 3 minutes and it is pretty good. I am getting a lot of nuttiness from the genmaicha and the green tea IS slightly bitter but I think I may have oversteeped mine as well. If you’re a fan of bananas you need to check this one out. The banana flavor is very strong and yes, I am getting a bit of cheesecake, how does Frank do it, I have no idea! It’s almost a little too much for me but I think I’ll try steeping it for less time next and see what happens. The flavors are more prominent as the cup cools. No rating for now.

I’ve got some marshmallow genmaicha I could send you.

Message me your info. :) I’ll make sure it’s vegan…but I think it is right?

I have a feeling I’ll tire of this long before my packet is in sipdown range. Yeah, I enjoyed my cuppa today… but please don’t ask me to have another tomorrow! Considering it’s been a few weeks since I had any, I’m rather surprised.
Perhaps its just my mood today. Who knows!

I’d steal a little from you but not a lot. That’s how I felt about this one :)

Yeeeaaaah you could steal mine too. Why didn’t we coordinate this better, guys?? Now that we have a system, though, I think between the 3 or 4 of us we can do a lot better and prevent needless duplication sometimes… :P

aha I have a feeling there will be certain blends we push on each other to take more of, like this one heh
But yeah we definitely need to sort things out better!

I just like this as a treat from time to time after whomever gave me a taste. not something i an always drink….but now we’re spreadsheet dorks.. so we’re good lol

hehe the spreadsheet will be awesome. Our tea geekness has reached level awesome :D

haha i didn’t realise that i had already tried this before and snagged enough for another cup from Kittenna this weekend. Apparently its one of those teas from frank that i enjoy a bunch. I’m not getting much “cheesecake” flavouring here, but i love the banana + genmaicha flavour so it’s still doing it right in my books! Thanks Kittenna!

I’m always a little bit suspicious of genmaicha. I’m not sure why, maybe because in the past green tea really hasn’t been my thing, and the first genmaicha I tried was a bitter nightmare. I needn’t have worried, though! This one is seriously yummy!

The banana scent is very strong in the packet. It’s not exactly fresh banana, though, more like those foamy banana sweets you can get in pick and mix. They probably have a name, but I can’t recall it. The brewed tea tastes much the same as it smells, which is what I was hoping. I’m rather fond of banana flavoured teas, so long as I can actually taste the banana element, and there’s problem with that here. The intial taste is banana, and it’s quite sweet and candy-like. This is followed by a deep nuttiness from the rice — I guess I can get biscuit or cheesecake base from that if I concentrate, although it’s a little bit strong for that. More toasted than baked, really. Still, though, it IS tea and not an actual cheescake. Let’s be realistic here. The green tea base supports the flavours well, and doesn’t get in the way. It’s not bitter or astringent, and earns its place by contributing a slightly savoury nuttiness to what otherwise might be a pretty overpoweringly sweet tea. As it is, though, it’s perfect!

I think this is actually one of the teas from my very first 52Teas order, so I’m glad I took the opportunity to pick up a pack while I had the chance. It makes a really nice late-afternoon dessert tea, and is pretty good cold, too, if the dregs I just drank are anything to go by. Definitely a hit with me!

I like this too! I also wish they would bring back the Bananas foster.

Not that I had my doubts or anything … but this is seriously yummy.

The flavors meld together perfectly … I’ve never had a banana cheesecake, but, if I did, this is what I’d think it would taste like: sweet, creamy, banana-y, tangy deliciousness. The toasty, nutty flavor of the genmaicha works very well with the cheesecake notes … playing to the buttery crust notes quite nicely.

Really yum. My full-length review of this tea will publish in a few days on the SororiTea Sisters blog: http://sororiteasisters.com

I had mine without any additives … but maybe I’ll try it next time with a little turbinado sugar to see how it goes. It was good on it’s own!

I find it really makes the banana pop! so good. But agreed, it’s great on its own as well!

Ok. I am having the longest week ever. And it’s only Monday. I just got moved up a position at my work and went from 27 hours a week to 40plus and working late nights. It’s only been a week and I’m exhausted. I needed one of my favorites to pick me up a bit so I chose this one.
I love, love, love the flavors of this one. The banana and cheesecake flavors are spot on and the genmaicha is a perfect base. It gives a little bit of a buttery crust taste to it.

Banana Cheesecake genmaicha is better as a latte, IMO, but still tastes a little like artificial funky banana to me. However, this is still decent tasting and I pick up the cheesecakeyness.

I hammered through my crochet work this morning, completing a turtle amigurumi pattern
http://awkwardsoul.wordpress.com/2013/02/11/turt-the-turtle-amigurumi-crochet-pattern/
I’m hoping it does well – my crochet sales go towards tea!

Seconding the love for the turtles. Those are precious.

Omg, those are adorable! ♥

Thanks to Jackie T for this tea.

This was actually tea that I acquired for my boyfriend who loves banana teas. He chose to brew it today, though, and as a tea lover how can I turn down a sample of free tea?

If you love banana flavor, this is a very good tea. The banana flavor is definitely strong in this. Someone once compared it to “Banana Runts” and I think that’s a pretty spot-on comparison. It does have sort of an artificial/candy taste to it. The flavor does work surprisingly well with the genmaicha, I’m actually quite impressed. I don’t taste the cheesecake flavor much when hot, but as it cools that creamy flavor comes through.

If you’re not a banana fan this tea won’t necessarily turn you into one, but it’s very interesting indeed.

The banana flavour tastes only very mildly artificial. The genmaicha flavour is very well balanced with the banana. Genmaicha has a sweet roasted flavour. I don’t feel that the two flavours compliment each other the best.

As the tea cools, I’m feeling like the flavours are melding together. I’m getting a banana-rice crispies taste. The banana is fading a bit into the background.

I’m not getting a very strong cheesecake flavour but there is a tang and heaviness in the flavour.

As the tea cools further I’m detecting a distinct creaminess.

Thank you to Indigobloom for sharing this with me!

My purse smells like banana thanks to this one lol

I kept smelling this one all day. I moved it to my coat pocket to avoid cross contamination with all the other teas I got today. Thanks again Indigobloom!!!

Oh and Sil some of these are from you too, so thank you so much! I now have a mountain of tea to try and I couldn’t be more thrilled!

LOL bananaaaa! http://youtu.be/b6jlWbiTy1E (despicable me. I love this short!!!)
Glad you liked it Raritea. Sorry about your purse Sil!

It was an awesometastic day, thanks to the two of you!! :D

My tea stash is yours lol. If we manage to get together on Sunday let me know if there are teas you want to try and ill bring them along if I can especially since it may be a bit before you’re able to come back :)

I think that the banana should win the award for most comical fruit. From the early days of slipping on a banana peel gags to these… plus it is so much fun to say! One of my favourite banana references: the Arrested Development Bluth Frozen Banana – there’s always money in the banana stand ;) http://www.youtube.com/watch?v=TlTM7Mbk_SU

For some reason I was able to keep myself from opening this up until a few days ago. I finally just really needed to try it.

I have been just really wanting banana flavored teas for some reason. Did I mention I’m not a big fan of actual bananas? I don’t get it.

So this definitely has banana. And on some sips, it tastes very strange, like it just doesn’t work to have banana, cheesecake, and genmaicha all together. But then the very next sip tastes marvelous.

It might be even better iced with just a touch of sweetened condensed milk, I think. I will have to try that. I’m not sure if it was the tea hot or the genmaicha that just makes it seem odd at times, but overall it’s a pretty awesome blend.