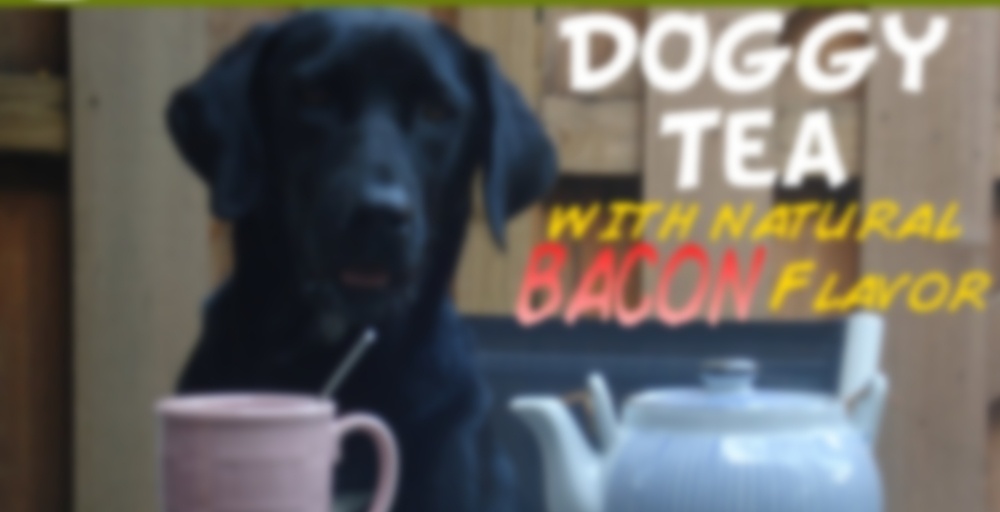 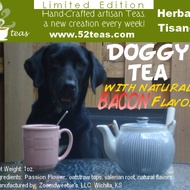 Does your canine companion crave your tea? Here’s a blend specially formulated just for puppy-dogs. Passion flower, oatstraw tops and valerian root (chosen for their reported calming effects), blended with natural BACON flavoring. This is sure to be a hit with your furry pal. Walter (English mastiff), Frodo, & Samwise (Chinese pugs) think it’s a great treat.

After a slight snafu with the postal system, my order from 52teas arrived earlier this afternoon. I’m particularly excited about this specific order because I threw in a bag of Doggy Tea for the furkids!

While I’m certainly no doctor, I do know after researching “valerian root” that its used as a sedative for nervous tension and excitability. Oskar (dachshund) and Sammie (chiweenie) both feed off each other’s crazy excited outbursts, no matter the situation. And there’s a storm a comin’ from the west… so with these two issues I’m looking forward seeing if this calms them down any.

First human impressions: It looks like small pieces of straw with broken pieces of dried passion flower. Smells like straw with a hint of smokiness.

First canine impressions: Both agree that Mommy described it accurately. It gets 3 sniffs per pup and 4 lip licks each – a good sign!

After brewing a half tsp. in 6 oz. of boiling water for 3 minutes the water is clear yellow with more of a smoky smell. We let is cool to a tasty 110º. (No burnt tongues here!)

Sammie tried it first after giving the cooled tea a good whiff – there was lots of lapping, followed by the licking of lips. He likes it! Seconds and thirds were had as well! :)

It took a lot more coaxing for Oskar to try it. He took a couple of polite sips, but hasn’t gone back for more.

Did you take a sip yourself?!

I did! It’s a different taste – not horrible, but something I could understand dogs liking. There’s a smokiness in the background, but the foreground is very much straw and oats.

Interesting! Keep us updated on whether it does actually calm your puppies or not :)

The rain has started – Oskar just went to hide in the back bedroom where my husband’s clothes are. That’s his comfort spot when daddy’s not around, but not scared enough to come to me. (He’s daddy’s boy.) Sammie’s going back and forth between Oskar and me. (Sams is mommy’s boy.)

I’m not sure my baby likes it, she just sniffed it at first and then looked at me kinda crazy and turned her nose up at it. I left it on the floor for her and she did come back and got one small taste after it sat there for 2 hours, maybe she dont like it maybe she just wasnt thirsty hard to tell, i’m sure she will drink it eventually. It’s not bad really tho it don’t taste like bacon it taste like valerian.

Did you actually taste it?? Lol Wow. And I am very pleased to see you call her your baby rather than just your dog. :-)

She says it is much better if i don’t give it to her warm, She don’t like it as much as some of my other teas but She agrees drink it chilled, she thinks it needs more bacon, I couldn’t taste the bacon myself tho She said she could taste it but would love to taste more of it She gives it 6 tail wags and a double bark :) Yep I had to taste it cuz she said she wasn’t going to try it until i did, i did it for her :)
Her name is Lyra Beast she is a Chi-hua-hua mix breed (Chi-hua-whata), She’s had me for about 6 years now, she is very playful and talkative with a great personality.

Scott! You should get some for your doggies, they would love it :)

Aweeee we call ours Furkids :)

My doggy’s sister LOVED puerh! She lapped it up! Sam doesn’t like it, though. I haven’t triedd him on green tea yet, but I bet he would like sweetened black tea! :)