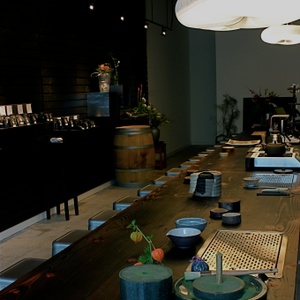 Top notch tea, knowledgable and friendly staff, great atmosphere – great place to come alone and chat with staff about tea, or to come with friends and enjoy a few resteeps of high quality tea!

excellent selection of tea leaves from single suppliers. One of the owners, goes and gets the themselves from farms in asia. Tea master!

Amazing tea. A great place to go to learn about what various teas are supposed to taste like. I would suggest it to anybody. The only problem is that it’s a bit pricey.

You have to meet the owner and hear how he got the various teas from around the world. It simply isn’t a full experience without it.

I feel it’s tiny and perfectly hidden against the rush outside; people walk by obliviously, carrying their Davidstea cups from the one a few shops down. The black exterior and long, rectanglular space means you don’t immediately notice it from the outside, and it’s great for people-watching.

It’s a TARDIS thing. The exterior looks tiny, but it’s bigger on the inside.

But the cups are large bowls you can hold in both hands to warm them, especially after walking here in the Vancouver rain. And they’re so shallow that they require a bit more involvement and attention so you don’t spill them, which seems intentional to keep you focused on the tea.

I ended up here after the Tea Festival sold out before I could get in, and it was a very nice compromise since they were one of the companies whose booths I’d wanted to check out at said Festival as it was.

A very nice and cosy tea bar. Their teas are clearly high quality and they will even make you fancy drinks with them (I had a mai tai). They also have really cute food thats infused with tea like maccaroons and caramel. The staff are lovely and make you feel very comfortable. Overall a delightful experience! :)

Went there today with my boyfriend and his brother. Nice place, with gorgeous decor. I love the wood counter and all the various wood coasters and clay pots. The staff are very knowledgeable about all the teas they carry.

You can sit there for hours drinking tea, usually re-steeps from the same leaves… which is exactly what we did, incidentally. They do offer ‘Tasting Travels’ which is a selection of 3 teas to try.

I can’t remember what teas the boys had but I had a tea mixture called Liquid Sunshine which was quite nice and great for my throat… if a more bitter than I’m used to having my tea. They also have little snacks and we were offered a dulche du leche and a candied hibiscus flower. The latter being probably my favorite as it tasted like sweet & tart cranberries. Yum!

I quite recommend this little tea shop in eclectic Kits, especially if you’re something of a tea purist or don’t really go for flavored teas.