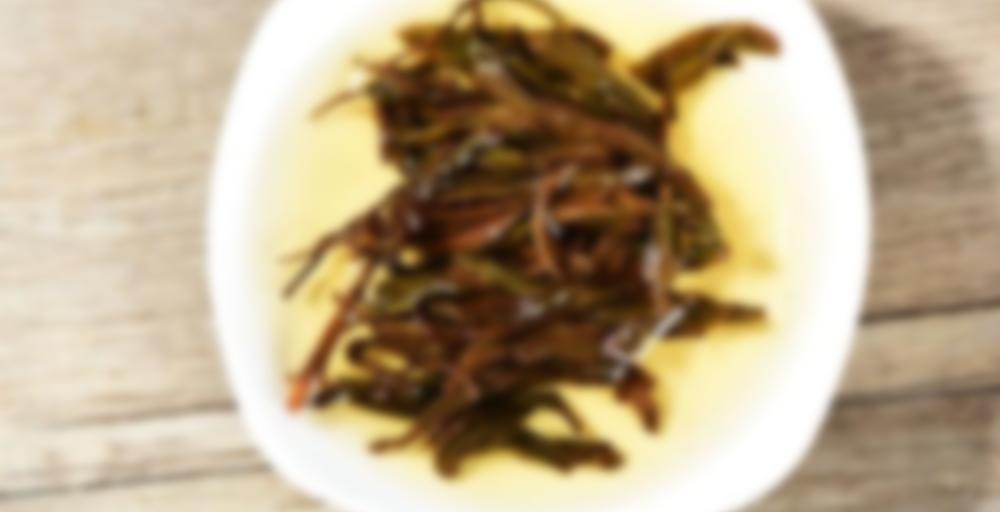 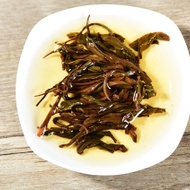 Purple leaf “Zi Cha” was harvested in Late April from the Jing Mai mountainous area in Lancang county of Simao. The fresh purple leaves were then processed into a flat needle style tea. The processed tea leaves are black with tiny golden shoots on some.

The brewed tea is citrus fruity sweet and very vibrant in the mouth. The smell is floral and grapefruit. The tea soup is a deep red-orange with hints of purple and very clear.

For more information on Purple tea read below:

During the hot, humid summer and fall seasons a portion of tea tree buds are purplish red colored. The source of the color is anthocyanin, which changes color along with cell sap acidity. High levels of acidity lead to red color, while medium acidity is more purple, and high alkalinity tends toward indigo. Purplish red tea results from an inherited reaction to unfavorable hot and humid summer environmental conditions, providing the tea tree with a mechanism for fighting scorching ultraviolet rays.

Pu-erh tea growing areas tend to be between 1000 and 2000m elevation. According to surveys, higher altitude tea growing areas receive as much as 8 times the ultraviolet light of lower altitude growing areas. During the dry spring tea season, the atmosphere tends to be quite dusty which serves to reflect, scatter, and absorb most ultraviolet light. Entering into the rainy season, atmospheric dust is frequently washed away by rain. These clean, clear atmospheric conditions allow virtually all UV light reach the surface. In order to resist damage from this shortwave radiation, tea leaves produce anthocyanin, which can reflect away a portion of the UV light hitting the leaves. Although a southern Yunnan tea field during the high of the summer is a sea of green, most eye-catching are the specks of purplish-red scattered throughout. Purple bud tea trees occupy approximately 1-2% of all tea trees, and occur with varying intensities of purple.

Purplish red bud tea has throughout history been regarded as a standard for quality tea. Lu Yu in the “Cha Jing” evaluating the color of tea leaves, came to the early conclusion: “bright cliffs and gloomy forests, purple is the highest and green the second”. Purple tea features prominent fragrance and rich flavor. A small number of tea trees growing on the rocky slopes of Fujian’s Zhengyi mountain, because of their red color, are given the famous name Da Hong Pao. Another historically famous purple tea is Zhejiang province’s Guzhu Zisun.

Purple Bud Tea, grown in high mountain ancient tea fields, is hand-picked by growers who select only young tender buds from the purple tea trees. It is solely and painstakingly processed to produce a very small quantity of heavenly tea.

Purple bud tea anthocyanin can be bitter, so it is recommended that those who do not enjoy bitter flavors reduce the strength of their brew so as to enjoy the fine tea flavor.

Here is another sipdown from very early in the year. This was actually the tea I finished immediately before the Yi Mei Ren I just reviewed. I tend to like the Jingmai purple needle black teas offered by Yunnan Sourcing, and this one struck me as being a more or less excellent one. I always feel like offerings of this type are some of the most underrated in Yunnan Sourcing’s portfolio.

This was an extremely complex black tea with an absolutely lovely mix of aromas and flavors. It was truly impressive how harmoniously every aroma and flavor was integrated into the whole and how superbly balanced the tea liquor felt. If I had to point out any notable flaws, I would point out that I found this tea to be a bit busy and somewhat filling, but aside from those two relatively minor issues, I would be hard pressed to find anything negative to say about it. This was very much an offering worth digging into and savoring. I now wish that I had gone ahead and picked up at least one of the two most recent productions.

Yes, I like purple needle black teas from Yunnan Sourcing as well. They offer such a variety of them that I never felt the need to look for them from other tea merchants…which makes me wonder if there are even much better ones offered by someone else.

Of the ones they offer regularly, this one and the Feng Qing Ye Sheng are always my two favorites. I like the Dehong purple black teas too, but I find them to be a little more inconsistent. I’ve also never bothered investigating the Yunnan purple teas sold by other vendors, save for one from What-Cha, which I’m assuming was actually initially procured from the same place as the one from Yunnan Sourcing. I know Alistair collaborates with Scott on sourcing pu-erh and has publicly acknowledged that he and several other vendors purchase identical or similar teas from the same sources. Some of these teas are very niche products, and presumably only certain individuals or groups are going to be producing them. It’s also worth considering that only so many tea producers are going to be willing to do business with international vendors, so even if there are other producers out there, it may not be possible for us in the West to obtain their products.

Apparently, TheTea.pl has a good Ye Sheng purple tea, though I haven’t tried it. I’m kind of on the fence about purple teas. I haven’t tried that many, and some of them have been quite raisiny and funky. I actually think I have this purple needle tea somewhere and should dig it out.

TheTea.pl seems like a good opinion for me. Because they are still in the EU. Getting stuff from UK seems like a nightmare nowadays :( Sorry Alistair!

Martin, their prices can be a bit high, but they offer 10 g samples of some of their teas. It’s worth a try.

Another tea that I shared w/ my roommates over a nice Gongfu session.

They were fascinated by the idea of purple tea as a concept so I pulled some options from my cupboard and let them pick one for us to try – this is what they selected, and it was actually my first time tasting it too so we all got to experience it together for the first time.

I was a bit worried because I know purple teas can often taste quite bitter, but surprisingly this didn’t really taste bitter at all in any of the infusions that I tried and neither of the roommates seemed to express that they experienced bitterness either. In general, I thought this was nice and medium bodied/smooth and it took quite a while for it to really open up and start giving more flavourful and interesting infusions – initially it was just mildly sweet and maybe a touch woody? Nice and golden, a little toasty!?

When it started getting a bit more interesting it was like drinking a mix of something kind of sweet and starchy like taro with hints of fruit in the undertone and more of a woody/toasty kind of vibe. Nothing really distinct in the tasting notes, but just more of them in general. Lovely flavour though! Honestly, it was more aromatic than flavourful but I enjoyed sharing it and getting to have that first tasting/experience with someone else.