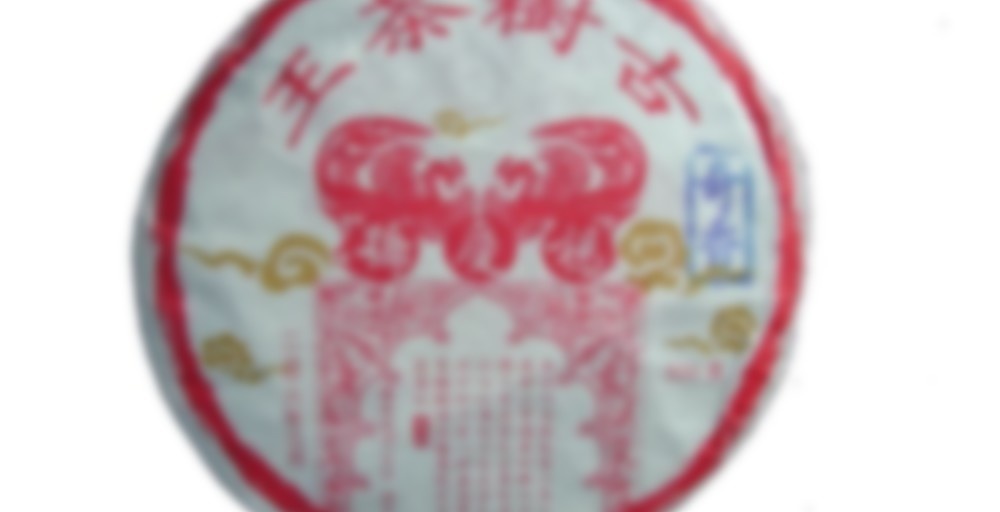 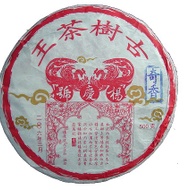 Striking red-and-white-colored design with traditional phoenix patterns. A bit similar to 2005 Yi Wu Cha Wang, but 2006 cake has a double-layered wrapper as used in 2004 Special Reserve Cha Wang. A blue seal on the wrapper saying “Chi Shian”, meaning “a wondrous fragrance”. Date (2006 March) and weight (500g) are also clearly marked on the wrapper.

6.5g in a 85~ ml shibo. If you read the description of this tea, the wrapper is labeled “wonderous fragrance” which couldn’t be more accurate. I received the tea in it’s original box still wrapped in plastic. Soon as I lifted the cover off the box, while the tea was still wrapped in plastic the aroma hit me right in the face. Obviously removing the plastic and wrappers ( yes two on this cake for some reason, works for more though, both are thin and I’m already a master of tearing them) only intensified the strong smell. I thought to myself that I’d like to tape it to my face and walk around all day with it. Enough on aroma for now just wanted to say a bit about it as it was very pleasant and strong.

The cake is a fat one at 500 grams and heavily compressed. It’s about the size of another 400 gram cake I own and smaller in diameter than the White2tea 90 HK 357 cake. I flip the cake over, probe the beeng hole for a soft spot and break free about 6.5 grams of tea. Material is a 6 mountain blend of old good plantation with at least 30% gushu mixed in

Into shibo it goes and I start my normal routine. Quick rinse which I use to heat up my pitcher and cup. I take a sip to get some idea of whats going on. Due to compression the rinse is light but the flavor is already pretty good. I give the the tea a couple minutes to steam /loosen up and then begin to doing flash brews. First few steeps continue to remain light in body and taste getting a little stronger with each one but they give you signs of whats to come. First, while the taste is light its not lacking complexity in the slightest. Sweet fruit, vanilla, plums, some cups even had an extra layer of an almost strawberry flavor, ummmmm YUMMY! to say the least. No bitterness or astringency in this but I also didn’t push it too hard. After taste was not the strongest but was full mouthed, in the throat and I could still taste it almost 2 hours after stopping. Second, there is some serious no joke Qi going on here. Strong feeling in the throat. Someone else has said they can almost feeling it drip down and I agree with them 100%. That throat feel continues into the chest and stomach. Very warming as well, full body sweats from forehead to shins, I think its almost needless to say but I was very very tea drunk. The feeling was closer to the effects LBZ has had on me instead of the normal yiwu calm and relaxation. Third, this tea steeps forever and not only that but the flavor and qi never really subsided. I got 20+ out of this and could have gotten 3 or 4 more longish steeps before another couple really long ones. My initial session was about 12 cups before I took a break. Came back to it a few hours later to finish it up and the taste was still full, complex and the Qi was still full force. I’m not sure that I’ve had any tea deliver Qi of that level 15+ steeps in.

In general the body is not overly thick like some of the more modern teas of high quality. The taste is light but really good, need to pay attention when drink this. So this is not perfect but what does well it does exceptionally well. Right now this can be acquired for $275, so right around .50 cents a gram. I think that if you’re in the market for quality eastern banna tea then you really can’t beat this at that price. To elaborate a bit further, it’s cheaper than both Bosch and Tuhao from White2tea. Those are some good teas, I own both and I don’t want to sound like I’m knocking them but they aren’t in the same league as this in terms of durability, Qi and complexity. That and it’s got a decade of good storage on it! This is one I am without a doubt going to be “hitting with a hammer”

Who sells this tea?