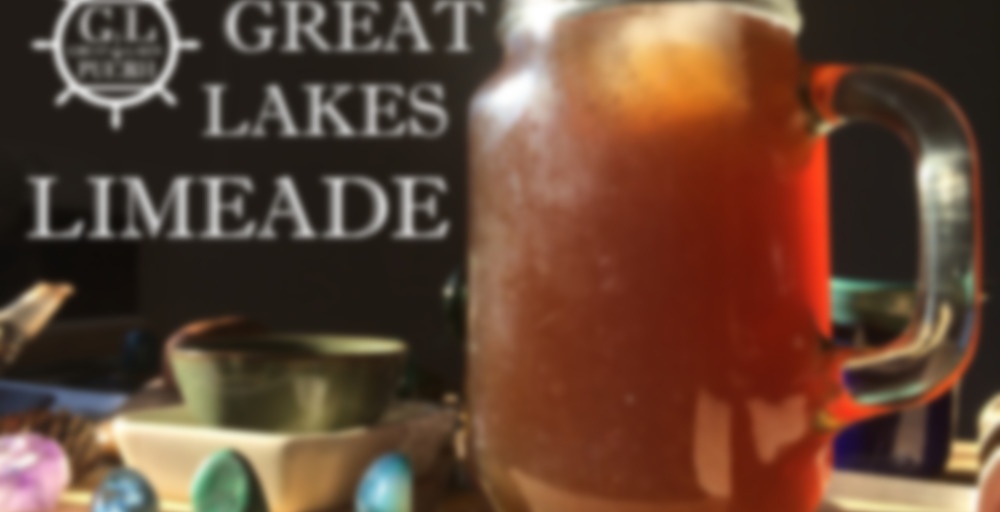 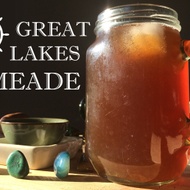 by Whispering Pines Tea Company
--
You

Great Lakes Limeade is a refreshing summer drink with a heavy dark pu-erh base, grounded with dark brown sugar and balanced perfectly with a squeeze of lime!

The next step is to add one tablespoon of dark brown sugar to the hot tea and stir until dissolved.

After you have your cup of double-strength hot sweet tea, take a 16oz glass and fill it 2/3rds of the way with ice. After that, pour the 8 ounces of hot sweet tea over the ice and stir it up. Make sure to add the ice and then quickly pour the tea in before the glass gets cold, as quick temperature changes can cause the glass to crack.

Finally, squeeze 1/2 of a lime into the glass, top off with cold water, stir and enjoy outside, immersed in nature! :-)

This is really really awesome!!
I’ve drank a pretty good bit of it the past few days actually because damn it’s so good.
Not so easy to describe, its earthy and almost kinda tropical to me, like a refreshing tropical burst of of lime followed by a smooth soothing earthy taste of puerh with just a hint of sweetness, awesome!!
Lime to me sometimes can make things a tad bitter or sour even but not in here, the strong puerh and the slightly sweet brown sugar balance it out very well.
Looks like muddy water taste like heaven, hard to describe for me because I had it with different puerh and it’s gonna taste different pending on which puerh you use, I’ve used 4 different puerhs so far with, I think really thick, dark earthy, woodsy Puerh is perfect for it.

I had a few vaariations of it too so I’ll share that with ya, cuz i think it was interesting.
I made it with an aged Liu Bao and it was awesome, a little sweeter than with the Puerh and not quite as earthy, very nice but I like a really earthy Puerh for this.
Fresh Lime is is important for this one, I did run out of them and I used a tablespoon of lime juice instead, it was pretty good to but just not as good as a real lime.
I also ran out of dark brown sugar and had to use some light brown sugar once it was also really good but the dark brown is the best, dark brown had a slight molasses kinda of taste to it that played much better than the sweeter taste of the light brown sugar.

If you try this, which i think anybody who likes puerh should try it, Do it exactly the way it is written here! You’ll love it, if ya don’t absolutely love it at first then try to play with it some ;)
I played with it some because I loved it and because I ran out of stuff for it from making so much lol

I’m not putting a number on it because of the diverse flavors and tastes of different puerhs that you can use to make this, Make it with your fav Pu-erh or even better with WP Ontario 1357 Shou ;)

I kinda want to try it with a sheng too, just to see how its like lol

I think it would be tricky with sheng

ya, i think so too