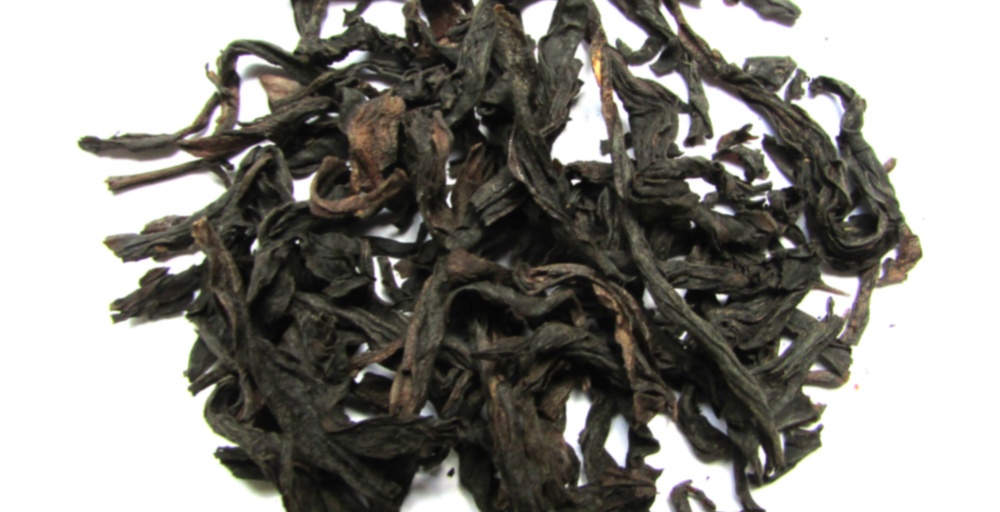 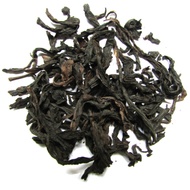 6 Weeks into my Hitch Fit weight loss plan and I had a serious case of the munchies last night. I haven’t had sugar other than veggies and an apple a day for 6 weeks and I think I could have downed a gallon of soda last night. I am glad that I didn’t, but man was it hard. I opted for tea to curb my cravings instead. DHP sounded good so I pulled out this bad boy.

This was perfect! roasty, cocoa, a slight earthy taste, with out being too mineral tasting. I enjoyed all the infusions and brought the rest of the leaves to work with me today for one last big cup. I love the packaging for these teas. Despite being neglected for a year everything was sealed up tight and seemed still fairly fresh.

This is BIG time roasty and mushroom-y. My husband took a sip and mistook it for a broth.

It is very deep and delicious.

I have the house to myself this evening, everyone is out seeing a bloody musical. I mean that literally, they are out seeing Evil Dead: The Musical, and since they are right up front they had to wear old clothes in expectation of blood spattering. Oddly, this is not one of my moments of being terribly uncultured, the tickets were bought way before me coming out to visit was a definite, and have sold out. Not sure I would want to go anyway since I am rather uncultured and get very bored with most stage performances unless it is opera. Clearly we need to have Evil Dead: The Opera, I would be all over that, extra points for singing in German.

So, what does What-Cha Wednesday have in store for us today? If you read the title of the blog you already know, it is Yancha time! My addiction to the various Wuyi Rock Oolongs is making my yixing pot so happy, the smell and sheen it has developed is awesome. So of course I used it to brew Fujian Wuyi Big Red Robe ‘Da Hong Pao’ Oolong Tea, though I can say that brewing a Yancha in a gaiwan or even a basket Western style is awesome, so, how does this one compare to the others I have tasted? First off I can say that the dry leaves have a very rich aroma, a blend of char and sweet fruit, it reminds me of peaches and plums cooked over a grill and allowed to get that really yummy char and caramelized sugar aroma. There is also a distant aroma of orchids and a touch of tobacco, the finish has a slightly yeasty bread quality. Heh, maybe that is why I have recently taken a great love of DHP, it smells like baking bread, all glutinous and sweet.

Brewing the leaves really brings out the tobacco notes, I love when tea has tobacco notes, it reminds me of my dad’s ritual of smoking his pipe, especially during the cooler months, I would assist him by cleaning his pipe, the rich sweet and a touch fruity smell of tobacco that greeted my nose was always a pleasure. Enough nostalgic reminiscing, there are also notes of char and grilled plum. The liquid freed from its leafy companion is pretty creamy sweet, like molasses, spicebush flowers, cooked stonefruit, and a tiny hint of loam at the finish.

Ooh, this IS a rich DHP! The mouthfeel is creamy, it reminds me of the way warm honey coats your mouth, super smooth and heavy, it is almost hypnotic…or maybe that is just me being a bit tea drunk. The taste is rather sweet with notes of honey and stewed plums, this transitions to a mild char and grilled plums, a tiny touch of cherry is present as well. The finish is honey and tobacco, a rich finish to a definitely rich cup of tea.

The aroma of the second steep is a sweet blend of stewed fruit and a touch floral, like an orchid flower that is about to drop of the stem because it has reached the end of its life. They tend to get an intense sweetness with just a hint of a fermented honey aroma. Surprisingly there is no char in the aroma of this steep. The mouthfeel is not as creamy, it has an edge of dryness similar to eating a very dark chocolate bar (my personal favorite.) In fact the dark chocolate comparison is not far off since there are notes of char and cocoa, much like a marshmallow and graham cracker-less smore. The finish is a touch of tobacco and a nice touch of sweet cooked plum. This steep was not as sweet as the first, but still rich…or dare I say, robust?

Third dance with this tea, third and final. As you have probably noticed I only go up to three steeps with the teas as of late. Several can go longer, but I have been told that my ramblings are usually best stopped at three, that most people do not have the attention span for a ton of steeps, and I can totally respect that! Short attention spans unite…now what was I talking about…ah yes, tea! The aroma is sweet and fruity, again no char aroma is present in this steep. This steep is much like the previous one but much milder, it lacks the robust quality and presents the same flavor notes in a delicate fashion. A very apropos finish, it is always nice when the tea winds down gently instead of just up and dying.

For photos and blog: http://ramblingbutterflythoughts.blogspot.com/2014/12/what-cha-fujian-wuyi-big-red-robe-da.html

The dry leaf is long and twisty and black.

I gave this tea two quick rinses in 96C water then poured off my first steep immediately.

The steeped leaf smells intense! Roasted, minerals, almost an acrid smell of burning wet wood (oak?), and something that makes me think of decay on the forest floor. it’s a bit overwhelming and I’m not sure I like it.

The liquor is a deep orange brown, very clear and smells like a very toned down version of the leaf. It has a lot of body and a silky mouth feel. The taste is intense and rich – roasty, cooked overripe fruit, maybe even mushrooms and smoked wood. There’s a strong grassy note that develops at the end of a long finish.

Steep 2, 4 seconds. This steep is both more mild and more intense. That acrid smoking wood note has moved to the palate, though I’m kind of enjoying it here. Intense minerality. An interesting numbing, almost tongue-coating sensation that reminds me of puerh. The finish has turned more citrus – orange peel I think.

Steep 3, 8 seconds. The burning wet oak note is pretty strong in this steep. Stewed plums, minerals, wood, decay, and then a hint of cooling eucalyptus at the finish. The mouth feel is very thick and silky.

Steep 4, 10 seconds. More stewed plums, minerals, and burning wet oak. Still acrid but the smell is growing on me.

Steep 5, 12ish? seconds. More fruity notes are coming to the forefront. The steeped leaves have developed a burnt caramel note which is nice.

This is some wild tea. It’s got a kick to it that’s unlike anything I’ve had before and from what I recall, substantially different from the other Da Hong Pao I’ve tried. I’m both put off by the smell and strongly drawn to it. I wasn’t sure I liked this at first but I feel like I could steep these leaves all day long.

This feels pretty mellowing – drinking this has been quite relaxing.

Lots of mixed feelings about this tea, but I think on balance it’s pretty amazing for the complexity. I think that this is definitely worth trying, even though I suspect a lot of people wouldn’t particularly like it.

Great review ! My first try of DHP I hated it. Now, when I tried a few I absolutely adore Wuyi oolongs, not just DHP. I prefer 195F and very short steeps.

Yes I agree with Boychik, you have to learn to like Wuyi oolongs.

I’ve had the Da Hong Pao from Verdant and it was very, very different from this – much less of an acquired taste kind of tea.