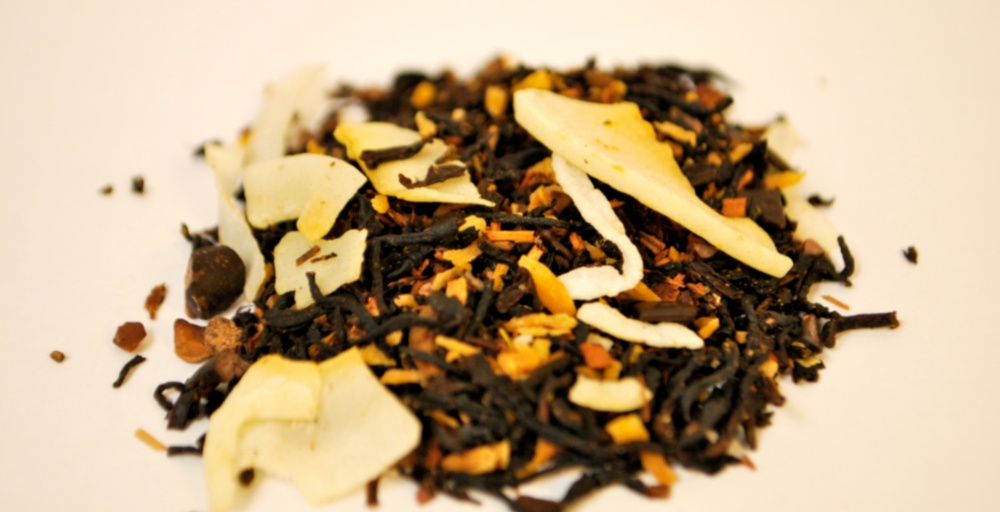 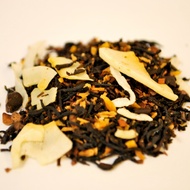 Rich black tea is joined by cocoa beans, toasted coconut and organic honey bush for a decadent treat. Try with steamed milk and sweetener for a deliciously warming cup.

another tea from Anlina that i had the other night. This one is a must try for coconut lovers. That being said, i’m not a HUGE fan of coconut as i find in tea blends that it goes rancid fairly quickly and sometimes the tastes is too intense. That being said, i can understand how folks who love coconut would enjoy this a bunch. It’s creamy and chocoaltey and very much like a dessert tea. Sadly the coconut is too much for me to really love it. It’s more personal preference than this being a bad tea. :)

Finally, a coconut tea that actually tastes like coconut! It’s a little bit oily, but there’s a solid chocolate background that balances it out rather well, especially with the black tea in the mix.

Our fourth tasting tea, after a brief spat of playing dress up and going out to lunch.
This was a parade of flavors. First and foremost there was a definite black tea flavor followed by creamy cocoa, coconut, and the rest. Afterwards, a tea and husk flavor sits in the mouth with a breath of coconut. (And by breath of, I mean I taste it in my breath.) A bit of brown sugar added blends the flavors together so they’re a party instead of a parade. The molasses brings out the cocoa and coconut meat flavors. A bit of milk is a terrible idea, as it drowned everything out.

The second steep was drinkable, almost good. I wouldn’t try another. The liquor had a strong coconut scent, but none of the flavor. The sweetness of the honeybush was gone and there is a bitter edge that really brings out the tea flavor above the cocoa.

Had this in a travel mug the other day while looking at houses, and oh my god, so delicious. Rich, thick, sweet, chocolatey and incredibly creamy. It felt like drinking a latte even though I had it straight. So much coconut creaminess. Amazing.

I’m a fan of that one as well! Definitely the best one I’ve tried from the company.

I also picked up Cucumber Mojito green which is awesome and super refreshing. Vanilla Chai is middle of the road.

This sounds delicious… Might have to check them out :)

Guess I should have tried the cucumber one when it came through in the Cooking TTB…it just sounded so unusual, I wasn’t sure I’d like it. Their peach oolong is quite nice and so is the walnut green.

Sadly, beelicious, they have closed down and their tea is no longer available for purchase. Let me know if you’d like to try some in a swap, though…I bought quite a lot in their going-out-of-business sale.

I’m 99.9% sure that they were resellers of teaguys.com, so if you want to order any of their teas, just head over there.

I’m also open to swapping, because I have over 100g of each, and while they’re all delicious, I just have too much tea.

Hi Inkling and Anlina! Appreciate the offer! I’d love to swap with both of you :) I’ll update my cupboard over the weekend and send you each a PM to sort out. Thanks! :)

This tea smells AMAZING when it is brewing and tastes almost as good as it smells: rich and creamy. The coconut flavor really comes through, but there is also a definite hint of dark chocolate; both mingle beautifully with the black tea base. I like it both black and with milk. It’s a great dessert substitute…I don’t feel like I’m depriving myself at all if I drink a mug of this instead of eating a piece of candy. Highly recommended!

yesterday i proudly made tea lattes with this one for myself and for my son…and he promptly rejected it as tasting of “water with a little coconut added”. on the upside, i got to drink two coconut truffle tea lattes!