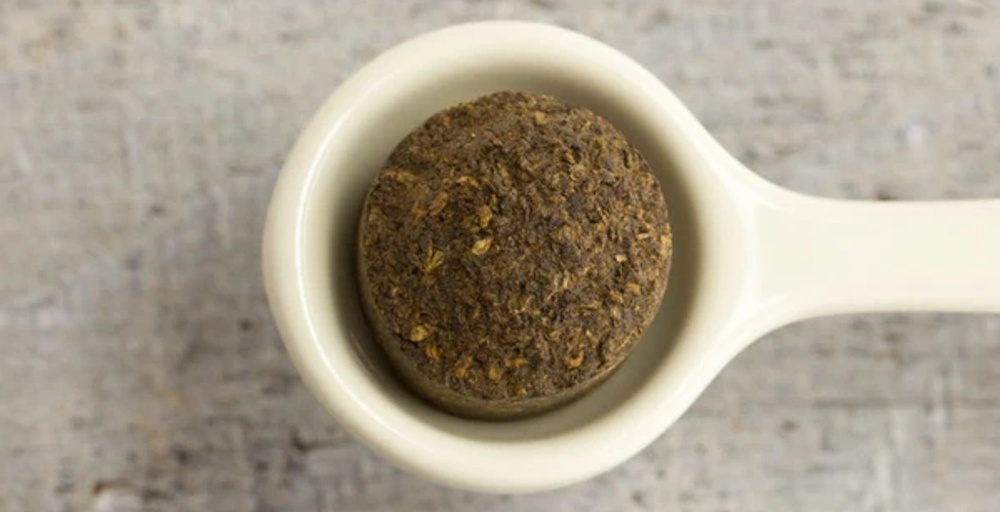 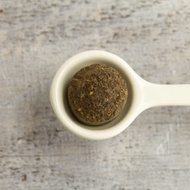 So dark in the cup it resembles coffee. This is the richest, strongest puer we offer. Aged for 9 years, these puer nests have a rustic and complex flavor with invigorating energy. Add milk or cream for a truly smooth and savory experience. Popular pairings include English muffins and scones. Caffeinated.

Ninth tea for March Mad(Hatter)ness! (What happened to #3-8? I’m having to skip around a bit depending on how my work schedule falls and the way tea and the time involved for different types of tea brewing, caffeine vs. no caffeine, etc., fall into that schedule). This is for the pu’erh tea round, going against Tea Etc.’s Chocolate Covered Strawberry.

This is going to be a landslide victory, considering that despite multiple efforts pu’erh tea just “isn’t my cuppa” no matter how hard I try… though, on occassion, I do find some flavored blends using it as a base alright. So when a pure pu ended up randomly selected against a flavored pu it almost seemed unfair to keep that randomizer… but you know what they say, all’s fair in love and tea…

Like all the teas in my bracket, this was purchased in 2018, from Tea Chai Te in Portland (though obviously they are sourcing it). I believe the copy writing at the time indicated the pressing on these tuos was 2008. I guess of all the tea in this bracket, this round is the one that should be least phased by the old age…

I used one tuo for 350ml 205F water, steeped for 5 minutes. I didn’t have time for a rinse prior (I barely had time for such a long steep before draining it into the work thermos and heading out the door!) and the tuo did have issue breaking up properly. That was entirely on me.

Has that strong, familiar earthy potting soil dirt smell. But, for a puerh, I’m doing alright with the flavor. It will never be my favorite type of tea, but this one has come out very smooth, and sweeter than I’m used to. I wonder if the tuo being unable to break up well left the steep “weaker” but, consequently, with a flavor that is far more appealing to me personally. It’s earthy, but doesn’t feel overwhelmingly so. There is a slight, but pleasant, minerality on the sip, which leans into a wet rocks/wet earth flavor. There is a slightly mellow and sweeter finish, while the liquor is that satisfying thick and rich mouthfeel that really coats the throat and stomach.

I am super surprised by this one! I doubt it is going to beat out Chocolate Covered Strawberry (I have very fond memories of that tea!) but it is putting up a hell of a fight to stay in the race. This is probably the highest rating I’ve given to an unflavored pu’erh.

Yeah some of these teas, it will be tough on other teas because of Fond Tea Memories. It would almost have been more fair if I had used all teas I haven’t tried before in the brackets!

I specifically didn’t want to open any of my “sealed” packages though, so I made sure my randomizer selected from my oldest teas. (though many of those I still haven’t tried yet!)

yeah, that makes sense too. I think all of the teas that were picked for my brackets were already tried by me anyway