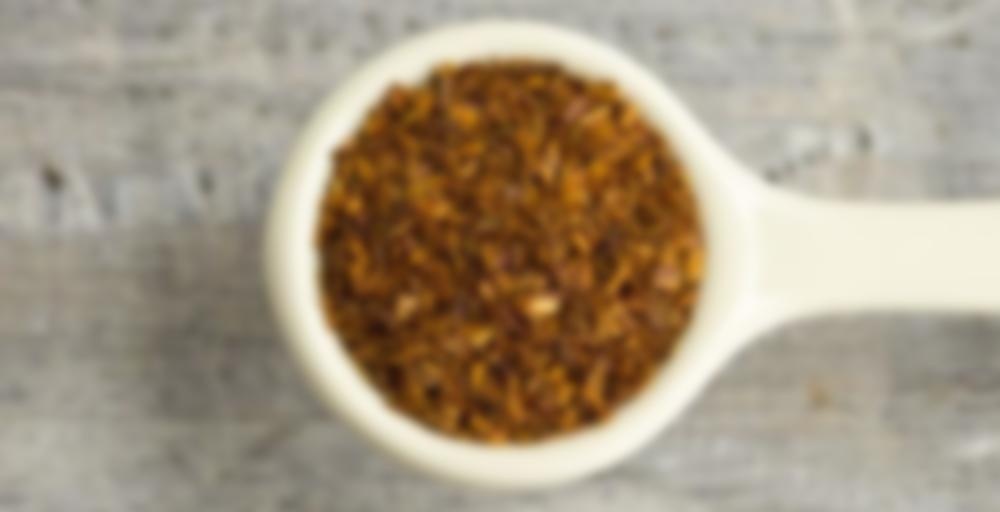 An invigorating combination of red rooibos, cinnamon, orange peel, and clove give this tea a delicious natural sweetness with a spicy cinnamon bite to it.

I’m surprised I haven’t reviewed this one yet, since I’ve had it since my Portland birthday trip in March 2017, when I visited Tea Chai Te. It’s their take on the famous Cinnamon Orange tea from Market Spice in Seattle, only on a rooibos base. I normally don’t like that artificial “Red Hot” cinnamon candy flavor used in these sorts of spice teas; they don’t claim to be using any flavoring, but it certainly has that “cinnamon flavoring” taste which makes me think of cinnamon candy or Big Red chewing gum that I don’t associate with teas that are only using cinnamon spice. That said, the rooibos base adds a lot of natural sweetness which helps temper it a lot, so I find it much less cloying and obnoxious than I usually find that flavoring. It’s actually kind of pleasant, reminding me of the sweet, satisfying counter-balance to the strong spicy cinnamon flavoring I get from the one cinnamon candy that I actually like, chocolate-covered cinnamon gummy bears.

The result is a tea that is more mildly spicy than overbearingly hot; the sip has a sweet rooibos and strong cinnamon candy flavor, with a very subtle sweet orange note in the rooibos base. It’s a bit hard to make out beneath the spice, though. A bit of clove is present toward the end of the sip. Mostly, it’s a strong cinnamon rooibos, and it’s the artificial, candied sort of flavor. But it at least isn’t hot, creating pleasant warmth during the sip but not leaving a long spicy lingering unpleasant tingle. It’s a safe choice for spice-weenies like me.

I have a few days on you :P

It’s Christmas Eve Eve, and this is a nice spiced tea that reminds me a bit of Hobee’s tea, a blend they serve in their restaurants and also offer in loose leaf. The cinnamon and clove waft off the cup and are the prominent flavors. I can also taste the rooibos and a subtle note of the orange peel. It tastes sweet too. I like it hot, and I’ll bet it would work great as an iced tea too.

Ya, it always made me think of a sweeter, more natural-tasting version of Hobee’s tea as well. While I frequently ice Hobee’s tea, I actually prefer this one warm; for some reason I don’t like red rooibos iced. Something about it cold brings out certain medicinal notes I just don’t like. But I drink it as a warm evening herbal all the time!