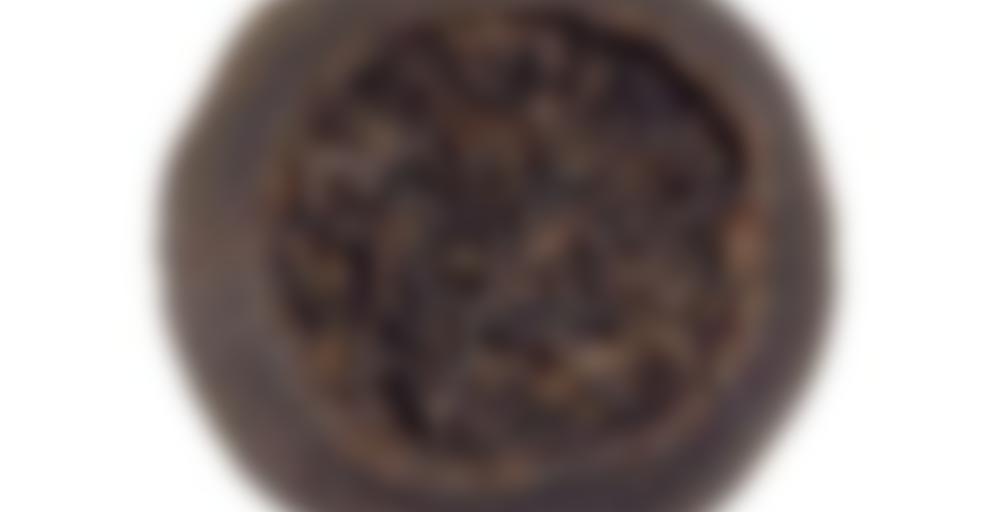 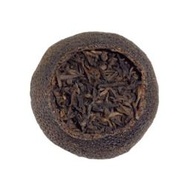 Green Pu-erh tea is placed inside of a hollowed out mandarin orange. Next, the tea-stuffed mandarin is exposed to intense heat for a short period, so that the mandarin peel is completely dried and lightly charred. This unique drying process also causes the mandarin peel to impart a delightful, delicate flavour into the tea leaves.

This was a more pleasant experience—preparing and drinking—then I had expected. I had heard all sorts of things about pu-erh and was rather intimidated when I received as a Christmas gift this cake of pressed tea inside a dried mandarin orange. I had never tasted pu-erh before, let alone prepared it, and expected it would be difficult just getting the tea out. It turned out to be easy. I sliced into the peel with a knife, and it turned out inside is just…tea—which I could pick out with my fingers.

I usually use an infuser—a rather roomy tea ball essentially but instructions I’d read said to make this loose in a pot. So that’s what I did. Also as instructed, I poured off the first steeping of 30 seconds (some sites say as little as 15 seconds for this step.) Some sites also say the next steeping should be only 30 seconds, but I went with the guide that suggested 3 minutes.

I expected something much darker, since I’m told pu-erh is the “real” black tea. (What we call “black” the Chinese call “red.”) But this is described as a green tea. Pu-erh is supposed to come in two varieties: ripened (shou) and raw (sheng) types. The Silk Road Tea site doesn’t specify which this is, but I assume since it’s green it’s the “raw” type?

My aunt and I quite liked it. I’ve heard all sorts of things about pu-erh. That it has for instance a “fishy” taste—which didn’t sound appealing. To me this one tasted like a really nice green tea, but without the grassy taste that puts me off. It’s somewhat oolong-ish to me. A bit of a woodsy note, and I think I can detect a bit of that mandarin orange, but so subtle is it I’m not sure it’s not my imagination. My aunt thought it a bit “flowery” but “very nice.” All in all a much more enjoyable tea than I expected.

(The second steeping at 3 minutes, 30 seconds was rather bitter.)