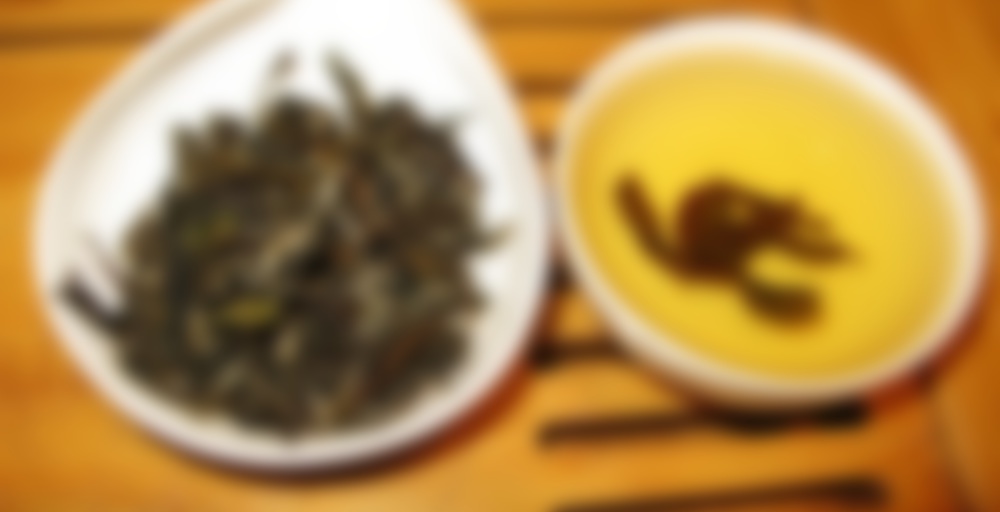 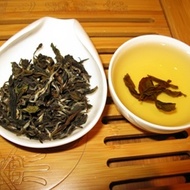 Prepared by our skilled artisan tea masters, our White tea Wu-long creation is a complex process, please try this new creation, you will enjoy very much.

This tea taught me how dramatic a small change in steeping time can be.

I have been drinking this off and on for a month now and had almost written it off as a tea that I just was not going to like. Then I accidently made it with water that I cooled longer and steeped it for less time and found myself drinking this a lot more.

3 mounded teaspoons of tea to a little under 2 cups of water.

It steeps a nice golden color and definitely is more complex and subtle with the less time and cooler water for steeping. The smell I’m getting is fresh hay with an almost cinnamon spice added. Cinnamon is not quite right, but it definitely is something close.

Taste when I steeped it longer was very vegetal this tea can be a wonderful combination of white subtly crossed with wu-long if steeped for less time.

I like this tea — it is a delicate, rather than strong and pungent oolong and, like Shang’s other teas, retains some of its white tea origins even when not in white tea form. I found that I liked it best when I steeped for the maximum time of his recommended range and put in a slightly larger quantity than he recommended. On the other hand, Shang has pointed out that Americans tend to like their teas stronger than the way they’re made and consumed in China, i.e. in China there’s more emphasis on the delicacy of tea, whereas I think in the U.S., perhaps because of our history of drinking coffee or tea from Lipton’s tea bags, many prefer them stronger.

I just made a little pot of this for my husband and me and I will probably keep re-steeping it late into the night (well, not TOO late). My hub, who generally drinks whatever tea I happen to be drinking at the moment without any fuss, and who never says much about any of them except for labeling any and every fruit flavored tea as smelling like fruit loops, today expressed the following about this tea: “It’s very creamy, it reminds me of an oatmeal stout”.

While I, a huge stout fan, didn’t really see that much connection with an oatmeal one, or any other one, for that matter, I can totally get the creamy part, and I understand what he was trying to say. Because this tea, that starts off as grey-green and beige beautiful wiry leaves and ends up as hay yellow liquor, is gorgeusly creamy and is a real joy to drink.

The only thing I seem to be disappointed about is that there’s not that much oolong element to it. It just tastes like a delicious white tea (which is not a bad thing!). I think I detect some green-styled oolong qualities in the aftertaste but they are VERY subtle. However, they might come out to the front more with subsequent steepings.

EDIT: OOOH, yeah! It is definitely an oolong. The second steeping of a copper color revealed lovely and slightly TGY-like notes. But the refreshing sweetness of white tea still shines through, which makes this tea truly unique. I am definitely going for the third steeping of this after my shower! (+ I’m upping the rating a bit).

Sounds interesting. (Especially since I am drinking a creamy stout at the moment.) I think I’ll add it to the wishlist.

Ooh! What is the creamy stout you’re having?

Sounds good! I haven’t had this one yet.