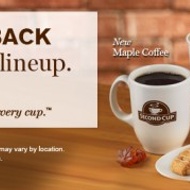 by Second Cup
77
You

Backlog from this week. Tuesday I think.
I’ve had a looooong one and somehow this just slipped my mind. Work has been hectic, and then I’ve been dealing with a bunch of supposedly unrelated health issues (five of them! I’m not whining, at all, but it’s a bit overwhelming)
Second Cup is so easy for me, being that there is one housed on the ground level of our building. Expensive, but handy.
So the tea… It doesn’t say on the advertisement that it’s a rooibos, so I was expecting a black tea! but then I saw larger one later on and saw that did so I suppose I should have looked there first. Oh well.
Nonetheless, I was mightily confused when I was sipping… there was SO much astringency going on, and it didn’t quite fit my idea of black astringency. As the cup cooled, I figured out it was rooibos, thankfully.
The Maple aspect was intense. I felt as if I was drinking syrup! and the flavour was spot on. It really needs milk to get there, sadly. I had hoped to go without.
Now, Maple syrup is not my fave sweet. Chocolate is better :P
Still, now I am curious… I need to try Oh Canada from DT again just to see how it compares!
Overall, I’d say this is really well done for a Maple tea. If you like that sort of thing, make sure you try it out :)

I’d love to get my hands on some and throw a bit of lapsang souchong in it!

ahhhh if only this wasn’t bagged :/

Had this yesterday with a friend after a long weird day. It was vaguely maple-y but it was pleasant with milk and sugar. I still wish we just went to Remedy instead for either a chai or a cup of Kusmi, Sloane, etc instead since this isn’t worth $2.50, in my opinion.

I don’t know what I was expecting; obviously a maple tea, especially a rooibos, is going to be really sweet. For the most part it was good but I started tasting something aspartame-y halfway through. Other than that they got the maple flavour bang on!

I got this at Second Cup in place of a Caramel Rooibos I had tried there earlier (and loved), but which they don’t seem to carry any more. I enjoyed this one as well, and it smelled wonderful! A great tea to have on a fall day. Will definitely try again when I go back to Second Cup.