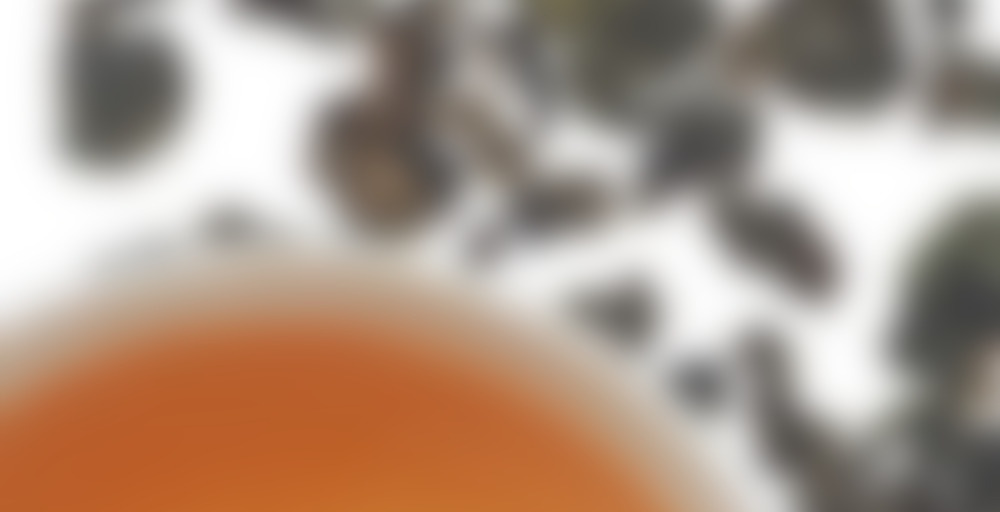 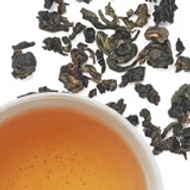 A “greener” oolong tea with an exotic flavor; floral, herbal and nutty, with an undercurrent of fruit.

Ti Kwan Yin translates as “Iron Goddess of Mercy,” and is the most famous oolong tea produced in mainland China’s Fujian province. The bushes grown for producing this tea are special varietals unique to this province, where hundreds of small tea farmers dot the mountainous terrain. Ti Kwan Yin is a “greener” style of oolong than the Formosa teas, with perhaps half the degree of leaf oxidation, and a flavor that tends much more toward the vegetal. The aroma of this tea can be very complex, with hints of orchid, herbs, nuts, melon and even candle wax commonly made reference to by tea tasters. Ti Kwan Yin is easily recognized by its dark green color, large leaves, and unique crumpled appearance.

Great summer tea for watching the sunset and reading a good book. There’s something about this tea that I find very relaxing, and I can feel waves of warmth washing over me and putting me at ease whilst I drink it. I’m not sure if it will earn a place as a staple in my cupboard as I develop my budding palate, but it’s gotten me very interested in oolong teas. Pairs great with a touch of fresh lemon.

Drank this as a post-lunch pick me up today. It’s a mellow tea with lots of complexity to its fragrant, floral and roasted nuts taste. Even though it’s advertised as the “greener” style, it’s imho on the more oxidized side. It has a great lingering and sweet finish to it.

This was one of the first Oolongs I’ve had in a while. I went up the coast this weekend for four days to San Luis Obispo. I was walking by the shops with friends and family, and I noticed the Peet’s Coffee & Tea shop in a corner. I just had to go in.

I wanted an Oolong to compensate for the long time I’ve gone without. I was enjoying the view outside, while letting the tea brew, and I couldn’t help but notice a slightly-sweet, grassy smell of the tea. The color was a dark green, reminiscent of a lake. This tea already seemed like more of a green tea than an Oolong. The flavor was lite, but not grassy, which was very different than the scent. I did notice that the tea was slightly sweet.

I carried it around with me to some of the shops, wishing I had more once I ran out. I made sure to buy a couple of other teas at the shop. I can’t wait to try them. This tea did not impress me too much, though I did enjoy it. More reviews later.

Not bad. Here’s my trick though!! Turn this not bad tea into an Amazing Taste Adventure. Go out and buy some decent local honey. Get a little airtight 1 cup size container. Put in tea, put in a bunch of honey to cover it up, then let it sit and soak in for a week. You now have epic “HONEY TI KWAN YIN”!!! enjoy the win!

Not too content with this particular tea. Lots of Floral hints. . .that are overpowering for my pallet :-/ I’m a fan of Peet’s Dragon Oolong . . . .but the Ti Kwan Tin just didn’t do it for me this morning. Perhaps, if I re-steep a few more times? I can see this tea tasting better if i diffuse it a bit. . . . .back to the kettle.

The perfect tea to drink in my new yellow & blue yixing teapot!

I have been reading some of the other reviews and I don’t understand the low ratings but the average steeping time is also 4 minutes and 45 seconds which is way too long for a TGY. I also don’t think the baristas as Peet’s can really make a proper cup of tea with paper cups, t-sacs and hot water.

Anyway, I digress. I have been working on seasoning my new yixing and this is the pot I am going to use for TGY’s now. https://instagram.com/p/z-YKiMILQX

I used boiling water and then let the water rest in a glass pitcher for around 3o seconds before pouring it over the tea. I am using relatively short steeps of around 30 seconds.

This may be my favorite tea from Peet’s so far. It is oxidized nicely and the flavors that come forth are very soothing. I am reminded of roasted butter, sesame oil,apricots and mango. I don’t get a lot of floral out of this tea, but that’s okay with me. I really am enjoying the richness of it, it’s very lush and almost decadent somehow. Imagine if you poured some brown butter and sesame oil over a bowl of mango and apricot and you get the idea.

This is the only TGY in my collection at the moment and I’m so glad I picked a good one. I will thoroughly enjoy the tin.

I love the pot!! gorgeous colours

I had a cup of this today at my local coffee shop (SO happy when coffee houses carry quality teas as well instead of that bagged tea crap). What a pleasant oolong! It had a light roasted flavor and leaves that did well with a second steep for the cup as well. When steeping, make sure you give these leaves ample room to expand. Like all oolongs, they will expand a LOT, and the more space they have to unfurl, the happier your leaves will be and the better your cup will taste.

The last time I had an Oolong, I really didn’t like it – but I can’t remember when or where that was, except that it was long ago – so that really is irrelevant. When I placed my last order with Peet’s, I tried to hit on each kind of black tea, and tossed in Golden Dragon Oolong to give me the best first impression of what an Oolong is, but when I saw Ti Kwan Yin given cultishly raving reviews on a few peoples’ feeds, and described in various places as unique and different from other Oolong, I added it to the order as well. It is definitely nothing like Golden Dragon in look or smell (I’ve still not tried GD).

From what little I knew of Oolongs, I always thought they were just another kind of black tea, albeit one I had found bitter and miserable in some hazy long lost memory. This one in particular is none of those things. When I opened the tin, I found that the leaves were in fact green – but unlike the straight rolled leaves I’m used to seeing be green, these were lightly crumpled balls, as though they’d folded in on themselves as they were prepared. The aroma is an intense, almost rankly nutty scent, with hints of floral tones and green tea – but it’s the ripe, green, fermented nuttiness that dominated what I smelled, and I was absolutely clueless as to what I’d be getting once I brewed it. This was a blind date if there ever was one.

Every tin of Peet’s tea says to steep in boiling water for five minutes, which is almost always horrifyingly wrong, so I am used to ignoring their instructions. In this case, I went with 180F and 2 minutes, as the tea seemed green and fresh, in need of a gentler touch. After 2 minutes, the color of the water had barely changed at all, so I added another minute… and another… and another. At five, I finally concluded that perhaps this is just an unusually light tea, a golden yellow but only just so. It absolutely looked understeeped – but it wasn’t, this is just how this tea is, it seems.

The aroma of the tea is very similar to the leaves, but the green tea becomes more pronounced, and upon tasting is far more intense than I ever expected. The intense nutty nose from the leaves still dominates, and lends the tea a unique flavor that I absolutely love, reminding me a bit of my Puttabong first-flush darjeeling – a few of the flavors from that explosively intense and varied tea comprise the nuttiness here. Perhaps this is the “Oolong flavor”, or perhaps it’s Ti Kwan Yin in specific.

I really was quite surprised to find that this tastes like a green tea – the unique nuttiness and other tones I described take the foreground, but this is not a black tea, this is a green tea… so I guess an Oolong can be either (Golden Dragon is definitely blackened). Whatever faint memory I had of disliking Oolongs and Darjeelings is long gone – they have a wonderfully unique and complex bouquet of flavors, and so far are proving to be smooth, not very bitter at all, and remarkably umami. I am definitely a fan, and this is definitely one of those that will be getting re-ordered when it’s empty… and it’ll be empty soon.

As a huge fan of shincha, gyokuro and other greens of massive character, I have to add green oolong to my list of favorites. This is definitely green tea, but definitely unlike any other green tea I’ve ever had.

I think next time I’ll go hotter, maybe 195F as seems to often be recommended, and a 4-minute steep, now that I know that it is light in color even when done right.