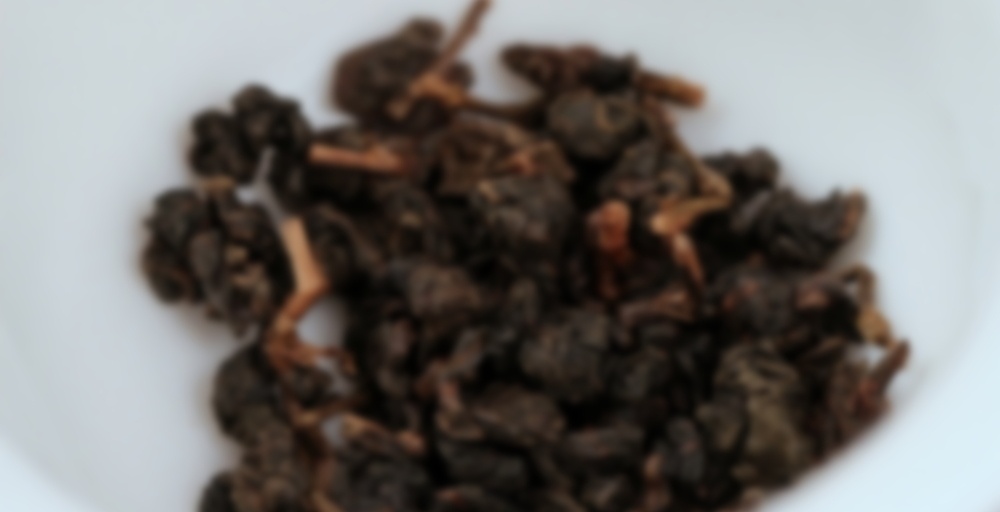 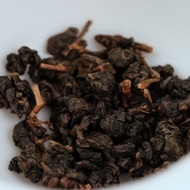 by Mountain Tea
82
You

The nose exudes enticing herbal fragrance, including thyme and dried basil, finishing with a hint of something malty. Once steeped, the aroma shifts into pleasant memories of buttered toast, promising rich and full flavors. The notes include raisins and crackers lightly flavored with honey. The aftertaste is smooth, milky sweet and can be savored for minutes.
Aged oolong is fast gaining fans in the east; enthusiasts cite smoother mouthfeel and bolder yet more complex notes as superior features compared to the non-aged variant, and after a long experiment we must agree! Aged oolong is stored under strict conditions, minimizing heat and humidity, and re-roasted every two or three years to remove naturally accumulated moisture.

I think this is what I’m drinking. The package only says "Aged Oolong 95C mountaintea.com). So, I’m taking a guess. The little pebbles are a dark brown and slight oily skin. They are heavily compressed and give off a dry wood and roast scent. I placed a generous amount in my warmed gaiwan and gave em a shake. The smell is quite potent and heavily fruited. There is an underlying smoke aroma and prominent raisin tone. I washed the pebbles once and prepare for brewing. The flavor is unlike the aroma. The liquor is pale bronze and very sweet. The taste is very fruity and juicy, yet there is an underlying roast that lingers on the tongue. This brew has a “fruit by the foot” flavor hahah. It reminds me of my childhood snacks. This was very good, and a decent quality aged oolong. I’m glad that I didn’t judge a book by its cover on this, for the packaging was not that attractive.

Also, there is a lingering sweetness that does last for what seems like forever. I feel like I just had a bunch of pastries with berries in them :)

I want to try it for some time . Did you get it from Whatcha or MT?

this is from MT. Do you brew gongfu or western. I have enough for a western session.

Gongfu. Do you have 3g? i have my teeny 50ml gaiwan lol

Yes I do, msg me address, and I’ll have it sent out with some goodies :)

This fruit aftertaste lasts literally over an hour after drinking xD

Aaaaaand another tea goes on my wishlist!

I’m only here to help xD

The 2003 Aged Green Heart Oolong came to my attention after some of my reddit buddies on r/tea messaged me about six months ago and raved about how delicious and nuanced this tea is. I kept this information in the back of my mind, where it lay dormant for several months. Then I saw the results of the 2014 North American Tea Championship and saw that this tea won 2nd Place in the Aged/Baked Oolong category. I’m not entirely sure how reliable these results are, but I figured that this tea was probably worth a shot regardless. I’m a huge fan of aged oolongs, especially ones with bolder flavors and a nice mouthfeel.

This oolong is from Wushe in Nantou, Taiwan. It has been stored in Taiwan since 2003 and has been roasted every two or three years to remove any accumulated moisture. The elevation of the Wushe tea garden is 1500 meters, or about 5000 feet. I suppose that this tea would qualify as a “high mountain” oolong, although it was not advertised as such. The site described this as 30% oxidized, so this tea belongs on the greener end of the oolong spectrum.

The What-Cha website also mentions that this tea comes from the Qing Xin varietal of the Camellia sinensis tea plant. Qing Xin is one of the most common varietals of Taiwanese tea. Although the varietal is nothing too out of the ordinary, I appreciate that the website gives out this information.

The leaves looked typical of a rolled style Taiwanese oolong. The color was very interesting, a sort of dark green-brown thanks to the aging and roasting process. The dry leaves are very full and unbroken, which is a good sign. The stems are still on many of the leaf segments, which is a bit unusual.

These leaves simply smell incredible. This is definitely one of the best smelling teas I have come across in a very long time. The primary aroma is of roasted nuts and freshly baked bread, very “roasty” and almost yeasty. The background aroma is very herb-like and malty. The Mountain Tea website also picked up on the herbal aroma, describing it as an “enticing herbal fragrance, including thyme and dried basil, finishing with a hint of something malty.” There is a certain brightness to the aroma that I can’t quite describe, but it certainly made me want to continue smelling this tea for a very long time.

I placed the leaves into a warmed gaiwan and was amazed by the amplified smell. All of the previous aromas were still there, but a very pleasant fruity, grape-like smell developed. This tea has every smell that you could possibly want in an aged oolong…simply incredible!

I used 6 grams of leaf for my gaiwan that is just a bit over 100 mL. It looks a lot larger than it is because the walls are very thick. I put 3.5 grams of leaf into my 70 mL Yixing pot.

I decided to brew this tea two ways. I really wanted to break out my adorable Yixing pot that I use for greener aged oolongs. I bought this guy from a tea master in Taiwan. I don’t get around to using it much, but it brings back great memories every time I see it on my tea shelf. I also used a gaiwan in order to give a fair taste test, since Yixing pots can affect the flavor of certain teas.

I started out brewing this tea with a few shorter 15 second or so steeps, and then moved up to a few minutes per steep by the end of the session. I played around with the water temperature a bit. The Mountain Tea Site said to use 95 °C/203° F water, while the What-Cha site suggested 85° C/185° F. I leaned towards the side of Mountain Tea on this one, since this tea is from their company. I didn’t find a huge difference either way, although I slightly preferred the hotter water. I used 93° C/200° F water for this taste test, so your own experience with this tea may be slightly different if you use a different water temperature.

I gave the tea a quick rinse and then started with the brewing. The first steep came out a beautiful golden color with a slight orange-red tint. After this first steep, I looked at the leaves in the gaiwan and noticed that they were barely even open yet. Perhaps aging tea makes the leaves more resistant to opening?

The first and second steeps were very fruity and malty. The fruity character is more like a dried fruit taste. I would describe the taste most accurately as nutty and raisin-like, with a background taste of charcoal. The little hint of smoke or charcoal on the back of the palate really adds a lot to the character of this tea.

The mouthfeel of this tea is very smooth and thick, almost buttery. I could feel the sides of my mouth being coated with the strong flavors of this tea.

This tea really excels in the aftertaste category. The aftertaste is extremely long lasting, and very smooth and malty. There is also a very noticeable lingering sweetness present. I could still taste this tea in my mouth 30 minutes after finishing a cup.

The third and fourth steeps were much sweeter tasting, which was a nice surprise. The “juicy” thirst-quenching attributes of this tea came out in these steeps as well. The flavor is much brighter and an interesting sharp and tangy note developed. I would describe this as lemon or citrus fruit perhaps. The herbal notes in this tea were quite noticeable in these steeps as well. The thyme and basil sort of flavors really play quite nicely with the dried fruit taste.

The later steeps were very different. The dried fruit notes almost disappeared, and the charcoal and smoke flavors became much more apparent. At this stage, the tea tastes almost like the later steeps of a heavily baked oolong such as a Muzha Tieguanyin. I finished this session after about nine or ten steeps, so this tea can certainly handle quite a few infusions.

After this tea session, I went for a run in the beautiful Maine spring (hooray, over 60° F for once). During my run, I kept on noticing the smoky raisin taste still in my mouth. This aftertaste just keeps on going and going…

The finished leaves were a bit darker than I expected. They were very curly and twisted still, even after all nine or ten steeps. They never really opened up fully into large flat leaves like oolongs normally do, but I suppose that is probably because the tea has been aged for quite a while. The stems on these leaves are very long and coiled as well.

This is one of the very best aged oolongs I have had, especially for the price. This tea is not even very expensive. On Mountain Tea, you can buy 2 ounces for $16, which is a little pricy. But if you are willing to buy in bulk (and you will want to), it’s not too bad. Mountain Tea also sells 5 ounces for $35 and 10.5 ounces for $60.

I give a lot of favorable reviews on this blog, but I don’t often repurchase the same teas again and again. However, I just placed an order for 250 grams/8.8 ounces of this tea, so obviously I enjoyed it! In order for me to buy that much of any tea, I have to really be in love with it. I can’t stop thinking about how I just bought this tea at barely over $5 per ounce. I feel like I’m stealing. If I could pay more money to Mountain Tea/What-Cha for this tea, I would…and that’s coming from me, one of the cheapest people you will ever come across.

Go out and buy this tea now, before the rest of the online tea community finds out and buys it all! It also might be fun to buy some of this tea and play around with aging it for longer.