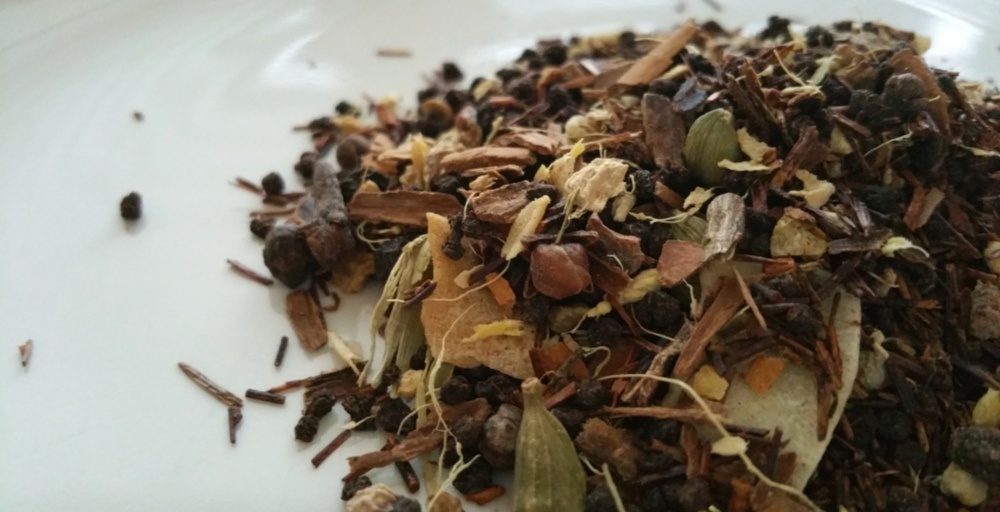 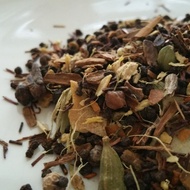 by Janet's Special Teas
79
You

I have resurrected this aging tea by adding cacao nibs. Exactly the thing.

No kidding! It is so good that I am now plowing through this tea like nobody’s business.

This tea smells wonderful and reminds me a lot of the coconut chai I already have from Satori Teas. There are large slivers of coconut, pieces of ginger, and whole cardamom pods and peppercorns. There are also pieces of what I think must be cinnamon bark. It just smells so spicy and warm, like a freshly baked loaf of spice cake. I love it.

I added honey and cream so it’s sweet and rich. The tea on its own is good but a little weaker than I normally like it so I think next time I’ll do six ounces of water instead of eight. I’ve been doing that with a lot of my teas lately, and I think I might enjoy this one prepared that way as well.

This second cup is even better than the first. I used less water and steeped a bit longer and it’s just right. After 80 degree days this past week, the weekend has decided it wants to have one last fling with winter so this is nice and warming and perfect for a cooler afternoon. I just finished my second cup and I want another. I think that’s saying something.

Thanks so much to Amariel for letting me try this one!

Now that I am back home I can continue trying out these teas I picked up from Janet back in September. I love chai so this was an obvious choice. I taste mostly cinnamon and cardamom although I swear there is also a ginger note even though it isn’t listed in the ingredients. I had some with a little light cream and while the spices are coming through nicely, I cannot seem to pick up much coconut or chocolate from this. Maybe a touch of cacao, but nothing too obvious. Would I buy more? Probably not, however, I appreciate that I was able to try a sample and not have to commit to a whole pouch of this.

Chestnuts are currently baking in the oven! I’m rather excited because I actually haven’t tried them before. Now to pick out another tea to drink which would complement the warm roasted chestnuts.

Yay! Do you have any favourite ways to eat them? I’m just having them plain and they’re yummy as is. I swear they smelled like bread baking in the oven! Must be due to their higher carb content.

Plain! I’ve only ever had them plain. I get bags of peeled chestnuts and just eat them as snacks. Or I roast them and have a fun evening of peeling my food. I imagine they’d be good in baking, and all the Italian shops around me carry different kinds of chestnut paste, so… yeah. Maybe I’ll find a recipe and bake something.

OMG chestnuts baking?! I had my mom buy some one year, but I don’t think we ever did anything with them. Did you just put (unpeeled?) chestnuts on a pan and bake for a while?

I stab them (or cut an X in the top, which is harder) and soak them in water for an hour first. A wee old couple told me that’s the best way. :D No idea if it’s true or not!

I wish I soaked them after the fact. I used Martha Stewart’s recipe which is basically just slitting them across, then baking them for 35 minutes at 350 degrees. They were ridiculously hard to peel so there ended up being a lot of wastage.

I haven’t seen chestnuts in my local grocer yet. I might have to go to T&T to pick some up. Becuase of course, I’m totally craving them now!

Chocolate and coconut with delicate chai spices, simply wonderful. The base is just right, not overly astringent, smoky or strong…very mellow and balanced.

I’m still shocked I didn’t grab a sample of this too haha. But there will always be a next time.

It’s really good. I may try making a latte with the rest. I don’t know if I will get anymore right away, seeing as I need to pare stuff down. But for a chai, I think it may work as a year round one. The coconut makes it spring and summer, and the rest is hearty enough for fall and winter.