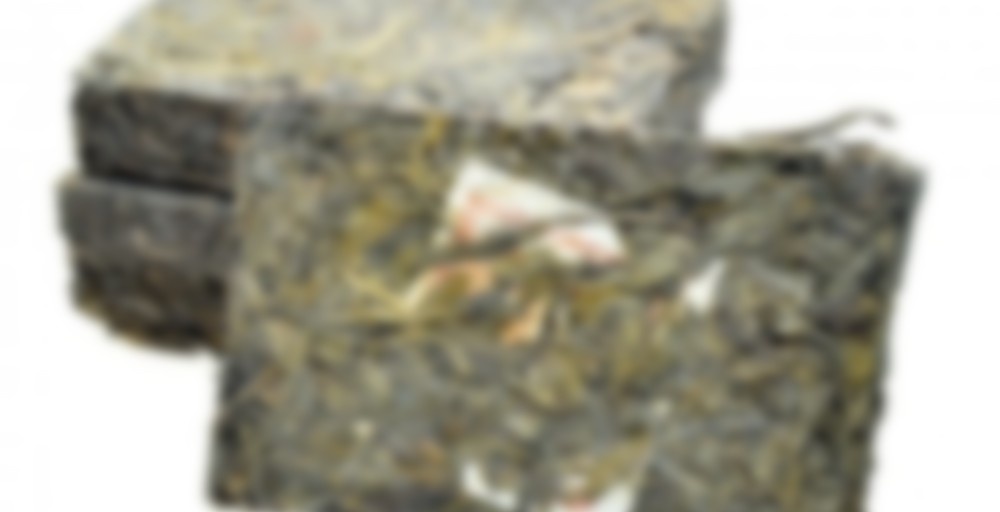 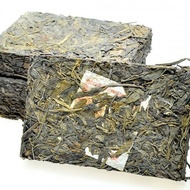 The raw material of this tea is 7-9 grade large- leafed Yunnan green tea. The tea bricks were stored in dry warehouse since 2002.

After breaking up, you could find “Golden Flower” hiding inside the tea leaves. This is the high quality assuranceery of the raw(Sheng) Pu-erh tea. Very rare on the market.

It tastes earthy, old, strong. But it is living, vivid, fresh. You will find it smooth and mellow on the first sip. The sweet aftertaste lingering around the throat after 3-4 cups.

This is a highly recommend tea brick for pu-erh tea lovers. This classic tea brick is good for daily cups,and it is very ideal for collection in the meantime.

2002 Ke Yi Xing Raw Pu-erh this one is nice in appearance when dry I have a sample size of it broke off the brick and ready to be steeped, I notice big leaves folded and just a few stems, dark and light brown colored with a slight earthy scent, after the rinse the leaves are darker brown and slightly chopped looking and I see more stems so what I saw in the dry as folded leaves were actually big pieces of leaves pressed together still to create a folded appearance. The aroma at this point is earthy but not woodsy, forest floor type earthy its more like back yard garden type earthy.
1st infusion is brown and very smooth like a ripe puerh but quite thin, it has the aroma still of the backyard garden with very root-like earthy flavor much like a beet.
2nd infusion is about the same in color but the flavor is much stronger of the earthy beets in fact its a very strong flavor that tastes like big red beets.
I have a very earthy aftertaste in my mouth that is nice.
3rd infusion little darker, I can still see the bottom of the cup if I look close enough but still plenty dark in color but still a thin tea. Still the same earthy beet taste as the previous infusion but this time developing almost spinach type notes, I wanted to not like that taste at first but it’s actually not so bad.
4th infusion still just as dark brown as the 3rd there is a little of the spinach type notes but not enough to replace the beet like taste. The earthy aftertaste is quite pleasant

I want to say here that most folks who drink puerh will understand what I’m talking about in my taste descriptions(I hope) while those who drink other teas may not,This is Puerh and puerh is know to have “Earthy” notes so when I’m talking about beet and spinach flavors and notes I’m not talking about flavorings or anything like that, its not like steeping a beet it’s just the earthy flavor of this Puerh Tea itself is reminiscent of eating beets or spinach to me that’s all, this is just the way I describe this particular earthy flavor, it’s not Beet flavored Tea :)

5th steep and the color just started getting lighter brown but the flavors are still coming through, I’m not sure that this one is going to develop into anything much more so I’m going to end this review saying that this is a very nice and earthy puerh to me I enjoyed it, I’m going to watch a movie now and try to enjoy it a few more times since it was just a sample, I may even want to buy some of it so I can try it again.

It sounds like the beet was a sweetness and the spinach was the earthy flavor for you. How long are you infusing? 30 seconds after a 30 second rinse?

I am not going to do a normal review. See Cody’s comments on this one as he did a much better job at putting it in to words. However, I will say my conclusions are a bit different. This reminded me of back in the day when I bought a quality bottle of burgundy wine. By wine standards it was still a cheap wine but compared to my normal fare it was a giant step up. I opened the bottle. Poured in to the crystal wine glass. Swirled the liquid around the glass. Smelled. Took a sip and realized, I much preferred a cheap sweet white wines or the cheap concord grape wines made locally. I was not sophisticated enough for such a hoity-toity glass. Same here. I found this puerh to be too musky, musty, earthy. I love horse leather. Musty, not so much.

If you look close this leaf has a few yellow dots on it. This is a fungus growing on the leaf. It is known as golden flowers and is apparently considered desirable in some collector circles. Is it the source of the strong musty smell and taste? I don’t know. I appreciate the opportunity to taste 10 year old leaf and learn about golden flowers but just not a fan.

Score based on trusting Cody’s review.

The “Golden Flowers” are famously found on Fu Zhuan dark tea. I bet it did lend at least a small hand in the flavor, as I’ve read it is an acquired taste.

Ahhhh so that’s what “golden flowers” are…that actually seems to explain a lot. I’m glad I didn’t know it was a fungus before I tasted it, as that would most definitely have changed my perception of the tea while drinking it!

Having done the Food Poisoning Diet a couple summers ago, fungus-y tea is something I can pass on without feeling like I’m missing much.

Wow, I have never even heard of it! There is so much to learn about tea!

I am so not sophisticated enough to even want to sample this one.

When I opened the package of this sample, the aroma was very earthy. I rinsed it once for 10 seconds, and it was still very earthy, so I rinsed it again for another 10 seconds. The earthiness mellowed somewhat by this time so I proceeded to brew it for 30 seconds for this first infusion. I’m glad that I did take the time for the rinsing, because this tastes just perfect for my palate: It is earthy, but not too much. There are sweet, caramel-y tones and a really lovely, mellow flavor. In the background, there is like a “hiding green tea” flavor … hints of fresh, vibrant green tea in the background,almost wild, that are often masked by the earthy overtures and caramel-y undertones, but every once in a while the green notes peek out just to let me know that they’re there and to remind me that this is no ordinary Pu-erh.

This is the first of many infusions.

Thanks to ESGREEN for this sample!

I’m still pretty new to pu’er, so the first thing I did was go to ESGREEN’s website for any brewing instructions. When I saw “10-15g in a gaiwan” I thought I was misreading something. So I weighed the sample I received and found it to be 7g. I shrugged and poured the contents into my 100ml gaiwan. I went with the rest of the guidelines on the website and did two washes of three seconds each. The liquor was DARK. I began thinking 7g was too much, but went on with the first steep at four seconds. I bid my time and sniffed the wet leaves first. They were extremely pungent, smelling of old, worn-out leather, dusty books, dirt, and hints of overripe plums and a touch of florals.

I turned back to my foreboding cup of deep, dark, brown-crimson liquor, and sniffed it. Earthy and musky. I took a sip…and sighed in relief. I guess I was expecting something like turpentine since it seemed like there were way too many leaves in the gaiwan. Turns out it was just the right amount. The resulting brew wasn’t potent at all, and it never did become unpalatable if steeped too long in the later steeps. A slightly familiar “sheng” flavor introduced itself. It was earthy and musty. Meh.

But then….whoa… This tiny bit of astringency I first detected hiding somewhere in the tea exploded, making my mouth and throat tingle all over like ants were marching back and forth across my palate. An excellent sensation of huigan. The liquor was silky, smooth, and had this interesting salty/slippery feeling to it. The tea becomes more complex over time, increasing in sweetness, introducing flavors of fruits and florals, and becoming much like a shui xian into the fifth steep. The mouthfeel becomes even more complex, though. All kinds of tingling, sparkling, smooth, salty, and coarse textures assaulted my tongue and throat, appearing and disappearing with reckless abandon. I took this tea into the twenties for steeps, finally rounding out with flavors of peppercorn, camphor, earth and wood, tiny hints of chocolate, and florals and fruit. Towards the end of its life, it left a beefier aftertaste, and the huigan was slower and subtler.

The leaves were quite massive. By the end of my steeping session, the lid of my gaiwan was resting on the leaves, and couldn’t even close completely. There was also a ton of huge loose stems and quite a large ball of broken pieces that had formed at the bottom, resembling mulch. The leaves that were whole, however, had held up nicely through aging and were very strong and thick.

Other things I noticed: around steep five, the liquor became kind of murky, and was actually gritty. At one point I ground my teeth and heard a crunch. Also, through steep four to around six or seven, tea oils were clearly visible resting on the surface of the liquor.

Great review, sorry to hear about the ‘crunch’ though.

Thanks! And yeah, it was a bit of a surprise! But nothing really major. Makes me kind of wonder about the cleanliness of manufacture, though. I’ve never experienced dirt or grit or anything similar in other teas I’ve had.

I am still working on my review of this one. I am not sure what I think of it yet. Thanks for a great review.

K S, it took a while for me to figure out how I felt about it as well. It’s definitely an intriguing one…I’ll be interested to see what your final opinions are!