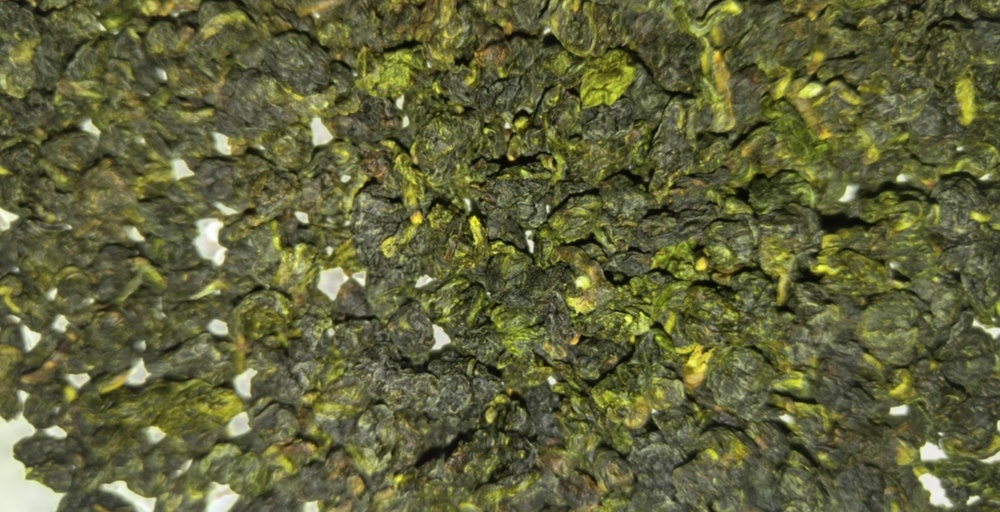 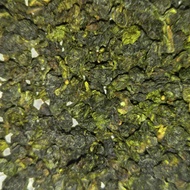 This is a very tightly balled Oolong, somewhere between 25% and 50% oxidized. I’ve steeped this up a bunch of sessions, and had trouble getting serious flavor out of it. I used as much as 10g in 110 ml Gaiwan, more than I usually would for an oolong. For temperature I used 195 F – 200 F, also higher than usual. (I generally use lower temps than most people) To get any real flavor out of it, I had to steep it for at least 30 seconds, even up to 2 minutes.

The description from the producer says naturally sweet, fruity, creamy, full bodied. The body was medium-full bodied, so I’m with them on that one. I didn’t taste fruit or creamy-ness. On the early brews I detected some malt , although not a lot, also some floral flavors. Actually, there was never a lot of any flavor. The malt faded right away, and was replaced by an asparagus/spinach vegetal flavor. The floral notes stayed throughout. The tea also picked a peppery flavor on the second or third infusion, which stayed until the end. A really nice aspect of the tea was a sweetness that appeared about 20 seconds after I took a sip, and lingered for a few of minutes. There was medium amount of dryness, nothing too crazy. I liked the tea but it definitely wasn’t amazing.

This tea makes a decent pairing partner with cheese in general, but nothing spectacular. A cheese called Equinox (by Birchrun Hills Farm), similar to an Italian Asiago (young Asiago Presatto DOP), brings out the floral notes and balances the pepper. Aged Gouda was good, but neither had any transformation or effect on the other. I didn’t like it with a 3.5 yr aged Parmigiano Reggiano. I was ambivalent to a pairing with fresh goat cheese. In previous sessions I thought it went nicely with an old-world style farmhouse cheddar, but this time around I was more ambivalent. The exception being the cracks in the rind with mold/cheese-mite growth (sounds bad but is normal with this style cheese). The tea balanced the bitterness of the rind fissures, giving a flavor of fruit, walnut, and a little horseradish.

I coaxed more than 10 steeps out of it. And the tea smelled great throughout, sweet and floral!