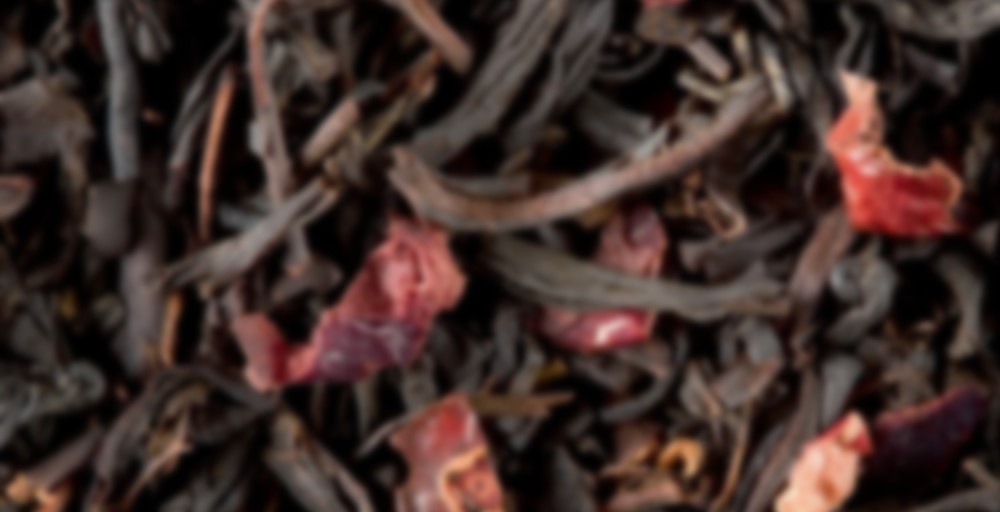 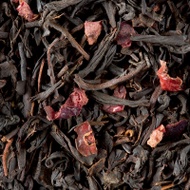 by Dammann Freres
79
You

A black tea deliciously enveloped in the gentle, sweet flavors of cherry and a bouquet of red and black berries. Delicate notes of wood and fruit produce a gentle, wonderfully scented liquor.

I had this tea this morning even if it’s typically more an afternoon tea.
I was expecting more cherry due to the tea name but it’s more a mix of red berries.
The scent is lovely and the dry leaf is made of some dry fruit and cut tea leaf.

The liquor is pleasant even if not very interesting. This is a natural and decent tea but for real cherry lovers I recommend more Cerise Noire from Betjeman & Barton (black tea base) and Sakura 2000(Mariage Frères on a green tea base)

This smells very cherry-like! Almost on the edge of medicinal, but not quite.

The cherry flavour here is quite lovely. It’s not exactly in the background, but also doesn’t overpower the base. It seems quite balanced. There is no hints of floral, which I appreciate as that does sometimes happen with DF. The smell is much stronger than the flavour, but I’m not bothered as DF teas are usually quite delicate in flavour (which I prefer to the opposite).

Lexa was surprised and said “I certainly don’t mind this!”

I wouldn’t turn down another cuppa of this, but I don’t know if I’d get through 100g on my own very quickly.

This one was also very old, so that’s another reason the flavor was so subtle…

I enjoyed it this way! It may have been over the top if it were any fresher. :P

It’ll be very interesting to see how it tastes fresh when I order it again… It’s been so long I don’t remember. XD

Thanks to CameronB for this sample.

This is very fruity, lots of cherry and plum with some light floral (rose) and cream notes. The base is slightly tannic but since I’m enjoying this with some soy milk, everything is smooth. The cherry is sort of like sakura and black cherry combo. Quite tasty!

I was inspired by the lovely and wise VariaTEA to figure out which of my teas are the oldest and sip them down. So I went back through all of my tea purchase emails and order histories and added all of the data to my spreadsheet (also a recent thing). Added a filter view for oldest teas and put the first five into a separate sipdown box to work on!

This happens to be the oldest tea in my cupboard, and it’s from December of 2016! Not only am I slightly embarrassed by that, but also shocked that this still has this much flavor left! I still love this tea, it has such a nice tart cherry flavor that reminds me of the dried cherries I love to eat with cheese and olives. There are pops of other red fruits as well, notably raspberry, and a hint of sakura. Apparently there is blackcurrant here as well, which makes total sense as it does have a dark syrupy note to it.

I have a good amount of this left, so I’ll likely be working on it for a little while. But it’s nice to have such an old favorite in the sipdown box! ❤

Spreadsheets are the best. Also, I’m so excited to try this one!

I also love spreadsheets, my husband always makes fun of me when I make them for video games… XD

Sorry it’s so old, definitely past its prime. Still yummy though!

That’s a-okay, I’m just happy to try it! Hahah, I have spreadsheets or lists for everything — they’re just so handy!

I’m impressed with your spreadsheet dedication and organization! I’d love to do that, but it seems like a really big project.

I don’t keep my old order e-mails around, but I do have a tea spreadsheet and when I add new teas onto it, I put in the Date field the month and year I received said tea. I am still working on sipping down my 2017 teas but after this year there aren’t very many of them left!

I generally archive all of my emails unless it’s actually spam, then it gets deleted. So everything is still there from a few years ago!

Most of my 2017 teas have been 50g bags, so the fact I’ve worked through as many as I have so far is still quite an accomplishment for me!

I found making my spreadsheet relaxing. It allowed me to rediscover teas I forgot about and inventory everything so that I knew what was going on. Hopefully it helps you get your sipdowns in too.

I’ve done a pretty good job of sipping down smaller packages, so I’m sure most of mine will be 50+ grams (originally) as well unfortunately.

Yeah that works too, my issue is I emptied my cupboard and redid it at least once so that metric isn’t accurate for older teas. :P

I don’t even use the Steepster cupboard for “inventory”. It doesn’t have the kind of sorting features I’m really after. I exclusively use my spreadsheet (which is linked on my Profile and public!) and yet I would still get “requests” for things “in my Cupboard on Steepster.”

Many thanks to Dexter for the thoughtful sample of this one! I’ve decided to make today a Firefly/Dammann Frere’s day primarily and now that I’ve finished off my Firefly teas for the day it’s definitely time to get started on DF.

This smells awesome, and steeped up you know what? It’s pretty fucking awesome too. This is definitely a very juicy, ripe candy sweet cherry taste! It is strikingly familiar to another cherry taste I’m familiar with and I struggled for a long time to place what but I finally hit the nail on the head: Tootsie sells bags of assorted fruit flavoured tootsie chews that come in lemon, lime, orange, vanilla, and cherry flavour. This tastes exactly like the cherry tootsie rolls! And that’s a good thing for me personally; the only flavours I like in those fruit bags are vanilla and cherry – and I like them a lot. Enough so that I buy the large bags just for those flavours and then usually give away the others because they’re nasty. They should sell the flavours separately…

I already have a black cherry tea; but I think I could make room for this one too. They really are drastically different but still perfect cherry teas. I still have another cup of this one though, so I’ll cherish that cup and then decide on whether I want to go the route of trying to get my hands on more of this. But yum!

A couple of years ago I bought a giant bag of all vanilla tootsie rolls. It was during Halloween and they were marketing them as ghosts or something because they’re white. Kind of a stretch in my opinion but I was happy.

What is your black cherry tea?!?

An awesome surprise gift from Dexter3657, who knows of my affection for the Frenchy teas, particularly DF and Fauchon. Thank you! :D

This is a boozy, sweet-tart cherry tea. As with so many DF blends, it smells amazing as soon as you open the bag and continues to be heady through steeping and finished cup. I love it—it reminds me a little of the liquor-steeped cherries I put in my highball drinks in springtime. Lemony tart like a Corpse Reviver, but a little plush and jammy too, where there’s a burst of juicy bright red cherry to balance it, keep it from being too puckery. It’s not like a dried fruit thing, nor like a straight fresh cherry…kind of like a pickled fruit (and Ysaurella ‘s right, it’s more like a red berry profile too, not just cherry). It’s weird, I hate tartness in tea with stuff like apples…but I don’t mind it with this jammy cherry profile…guess I’ve learned something new about my tastes!

I really like this one. Thankfully for me I’m not getting any cherry cough medicine associations (it’s nowhere near that kind of pinpointy plastic sweet), though I can kind of envision how someone could. It’s perfect for this afternoon—beginning of a long weekend, going to see a play tonight (feeling FANCY Anna! ha), another festival tomorrow, lots of time to just relax and chase each other around the house and play some more with perfume. A little luxurious but fun too. Exactly right for my mood.

You and Anna are both SOoooooooooo fancy. :)
This review put me in such a happy mood….

I think this tea proves ifjuly is WAY fancier than me!