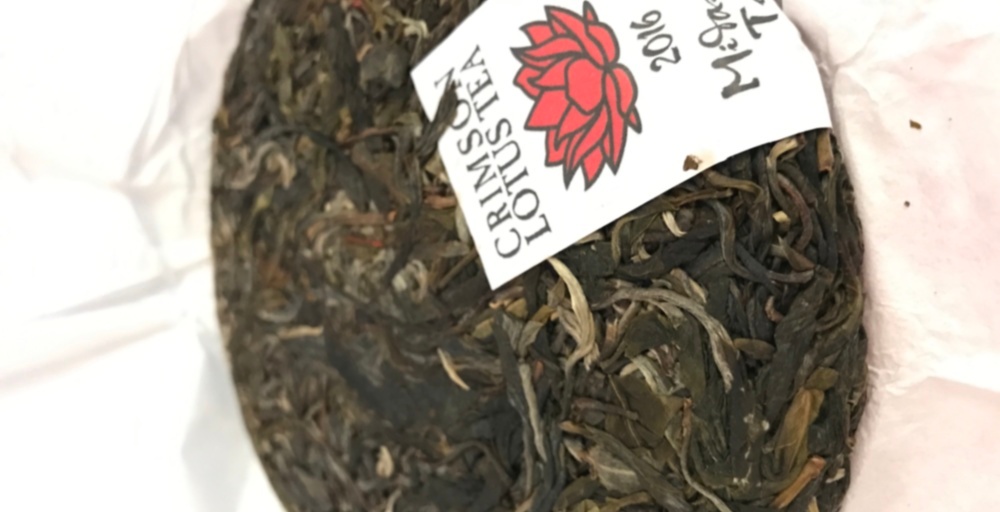 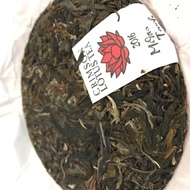 by Crimson Lotus Tea
81
You

This tea is strong despite the young age. It has the beginnings of the honey aroma Jingmai is known for. This tea brews both gentle and strong at the same time. It can surprise you. Stick this on a shelf for 10 years and you will have a truly amazing tea!

A Touch of Evil

Beautiful tea, nice leaves, taste starts a bit bitter even with flash steeps, then it turns sweet and stays like that until the last steep. Strong Qi, kind of agressive if pushed too far, long lasting body feels, Qi is on the speedy side, alert and relaxing sensations. I wouldn’t recommend it to beginners. I think this tea is high on caffeine, I feel some jitters after drinking a lot of it.

A few of these notes will intermesh with notes taken from my friends who had sampled this with me.

I had shared this tea with a couple of friends yesterday. I was planning on drinking an oolong for our second “party”, but they insisted on trying more sheng instead (and who am I to deny them the chance to taste good puerh?) while playing a game of Settlers of Catan.

I gave this tea two rinses prior to starting the session mainly due to the reason that there wasn’t much of an aroma from the leaf. However, on the third rinse/steep, there were subtle notes of “fruit or flowers of some type, with a touch of sweetness.” The flavor was subtle and unnoted for myself, but my friend had pointed out that there was a “sweetness, maybe honey,” subtly lingering on the tongue.

After a few steeps through, there were stronger notes of hay (?) and honeysuckle (?). However, these are the last notes taken as we continued with the tea, Catan, and fellowship. I thought that this had been a pretty good weekend with friends—who actually wanted tea! :)

Got this tea in the Sheng Olympiad. I had heard there was a lot of cha qi in this and it does not disappoint. It’s more of a calming effect though and not a “bouncing off the walls kinda loopy” effect that I’ve experienced with other teas.

The taste is absolutely wonderful too. I brewed it per the suggestion at almost boiling and kept to around 10s steeps. I tried to increase the time but I noticed some bitterness creep in so I’ve been dialing it back. The tea is flavorful throughout though even with some of the bitterness. Nothing too terrible as long as you keep the steeps on the shorter side. Very smooth. A little astringent. I wouldn’t say it’s an incredibly rich pu-erh with a lot of flavors but it’s an enjoyable taste. Not having to choke this down like I have been with others.

I could definitely buy a cake of this.

Hey now, this one has jumped to the top of my wish list if babble actually thinks there’s qi here ;) What was the tea that got you started on chasing the cha qi dragon ? :)

It was actually an aged oolong from verdant. I think it was their 1985 oolong? And of course they are out of stock. I got it from a couple bana teas I journaled too.

Haha can’t imagine that was cheap anyway but that sucks, hate it when I find a great one and it’s out of stock. Interesting that it was an oolong…haven’t really found them to have much tea feels. I’ll look for those bana ones.

I can always send you a couple samples if you decide you wanna try. Won’t make any promises lol.

Meileaf has some tea they promise will get you tea drunk. Take that for what it’s worth.

Very nice of you to offer :) I’d have a hard time parting with my Adagio Dante but maybe…. Never heard of Meileaf so I’ll take that for little

Brewed in a zisha at boiling. This tea opened up with lots of tropical fruits on the nose which slowly became an interesting savory herbalness. The brew is a thick golden color. Lots of honey sweetness which sits in the back of the throat and lingers on and on. Nice thickness with a good amount of slickness. Very slurpable. Good tropical fruit flavors with apricot and mango sticking out for me. QI is very energetic, strong, and heady. Lots of huigan on this with a lot of cheek salivation as well. Bitterness starts off non-existant and then slowly creeps in. Very dense, lush, and primal. Jungle like herbal and floral notes float around. One sip and my mouth is filled with floral perfume and never ending notes of honey, this sweetness lingers on and on causing lots of salivation. Cooling sensation is light. Good minerality and a hint of black pepper on the front palate. The qi almost bowled me over for a bit. For the price I’m a big fan of this tea. fresh notes of tropical fruit, lots of florals, jungle like savory herbal notes with lots of huigan and salivating, qi is very strong.

Another one from the group buy, also in orb form. This tea is very clean and really green tasting for puerh, even more than I would normally note with young, first year tea. Not really my thing, personally, as I don’t drink much green tea, but it does have a bit of puerh herb-y complexity with the sweetening after taste that starts to pop up in later steeps and a tiny bit of astringent citrus that gives it a very bright/golden kind of feel.

The energy is uplifting, but not overpowering. It has quite some endurance, though, as I drank it out over the course of two or three days. Overall, very green, very clean, and very light. Too much so for me.

This one was a pretty nice tea from Crimson Lotus. The dry leaf had a pretty light straw-like aroma. After a rinse though, I smelled a lot of sweetness on these leaves, mostly honey with maybe a bit of tobacco.

The first three steeps have a good mix of slightly citric, but still quite sweet, fruitiness with a softy honey finish and slightly creamy texture. The citrus was not sharp or acidic, so it was more like the flavor of lemon icing or something like that.

After those initial three steeps, the fruitiness remained, but no longer tasted at all citric to me. The rest of this tea was mostly sweet fruity honey in flavor. The astringency did pick up just a touch towards the middle of the session, but it never lasted long or anything. The tea had a pleasant silky thickness to it, and a gentle qi which I noticed only sometimes. One of the most honey-tasting teas I’ve had yet. Pretty tasty!

Got a very nice sized free sample of this with my last order to Crimson Lotus Tea. I brewed this in a solid silver teapot which I think brings out all the flavors of the tea. It seems to do this more than a Yixing Teapot would do. This tea started off sweet. Once the leaves opened up a bit a bitterness crept in. The bitterness lasted for a few steeps, maybe four and was eventually replaced by a sweet note again. I am not entirely sure what to call the sweet note of this tea that developed. Just calling it apricots seems a little off but I really did not pin it down. There was also a mild astringency to this tea. Overall over twelve steeps this was a very enjoyable tea. This is definitely an example of a sheng that is good to drink now. There was also a slight bitter aftertaste that persisted with this tea. This is one I would definitely consider buying if I put in another order with Crimson Lotus Tea. I don’t even know the price of this tea. I think it is one of their higher end teas but I could be wrong. In any case I have enough of the sample left for another go at it. Next time I won’t use the silver teapot but see how it is in a gaiwan. I think some flavors are much more pronounced in the silver pot.

I just tried this one this morning. I found the sweet notes hard to pin down as well. I got a lot of honey, but also some fruit – I think I might have called it sweet lemon or something, because it was almost citric, but wasn’t sour/acidic really.

They do free shipping for their stock from China, still charge from the USA.

In an effort to like sheng, I brewed this one at half strength to calm the flavors down a bit. It worked a little bit. This one was like light green vegetables and a little sweet, so I’m thinking snow peas or something similar. There were some floral notes as well, but I was distracted by the sheng taste in the background that reminded me of soap.

*Disclaimer: it’s probably not the tea’s fault. I dislike sheng.

Lol, I think it’s definitely a bit of an acquired taste too. I remember the first time I tried YOUNG sheng, I was definitely like there’s some weird petrol-ly reminiscent, strange flavor in here I can’t quite place but is very distinctive… but now I hardly notice it while drinking shengexcept when I’m craving it and feel like many other teas are lacking because they don’t have it, :P.

I liked this last year, so I was excited to try again.

The leaves are long and lightly compressed. I take a deep inhale and identify sweet and woody tones with a back draft of smoke and very faint blackberry. The leaves carry dark and heavy scents. I warmed my teapot up and placed a fair amount inside. The warmed leaf gives off fragrant aromas of wet wood, nectar, crystallized honey, dough, and some bitters. I washed the leaves once and prepared for brewing. The brew begins sweet and very tasty. I can instantly pick up strong floral characters, for I can even smell flowers in the liquor. The brew is potent and thick with a brief huigan and some slight sour tones. This tea is quite good. The qi is instantaneous with calming and an alert feeling. I call this type of “talk tea”, for I suddenly had the urge to converse, haha, My friend and I had a political debate while I was drinking this which fueled the qi even more. The brew warmed and settled my stomach and refreshed me. I was quite happy while drinking this brew. The later steeping yields almond tones with some honey. The qi beautifully developed further and further and caused caught a zooming sensation. I liked this.

Note: My second session was not nearly the same. The tastes were off and muddled. The qi was more aggressive. The aromas were faint. I don’t know what the problem was. It may have been storage conditions, for it became much colder than my first session.