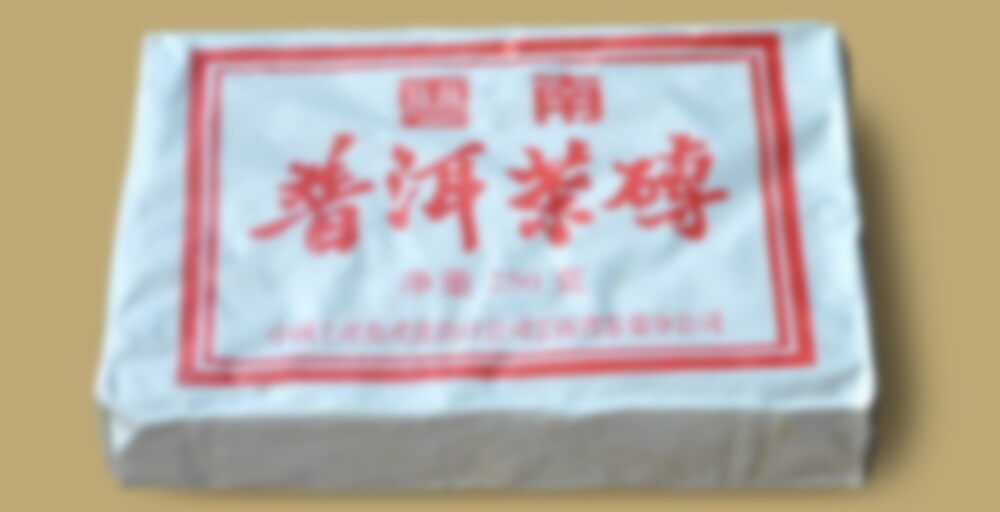 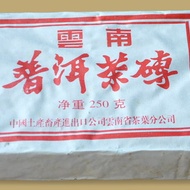 This nice Shu Pu-erh brick based on CNNP classic 7581 recipe, wrapped in a traditional plain wrapper. It has an agreeable mellow character and the earthy flavour. Excellent for drinking immediately or even better to put away for aging.
Picked and processed in Simao.

OK – so this has been sitting in the bottom of my ‘shu box’ for years. I picked it up back when it only cost $6 or so for 4 bricks and it got relegated, untasted, to the bottom of the box due to poor reviews.

I’m going through some shu, so I figured ‘why not?’. This afternoon is time well overdue.

It’s not actually that bad. The harvest area is listed as Simao (which just means Puehr these days). More specifically Yiliang (Kunming) factory. So ‘generic’ I guess.

So I’m using a 220ml Yixing pot for this brew with 14 grams of leaf. It’s not a ‘stand out’ tea by any means, but it doesn’t deserve to be shat on. It’s very similar to Dali/Taetea productions which are well-liked.

First and second washes discarded, second wash I tasted – it wasn’t bad, but I could taste the familiar concrete warehouse flavour. Yum! It dissipates fairly quickly.

By the first proper cup, this had moved toward a more pleasant woodiness and earthiness. The tea giving the usual ‘Coca-cola’ darkness right from the start. Creamy mouthfeel.

Thick and smooth shu. Slight tightening in the throat. It’s getting some camphor going on after brew 3. Much darker now and peaty with some walnut hints. The camphor has an edge of sweetness, but it never really develops into dried fruit territory. It makes me think of old varnished school tables. Or perhaps chewing on a hot wet pinecone.

I think this is good for about 8 or so brews, but probably best enjoyed after a greasy meal and a fine accompaniment to charcuterie (or more traditionally dim-sum).

I just happened to be trying out some Nem Chua (cured pork).

I give this 3 stars. Quite standard ‘cheap shu’ with a pleasant hit of camphor on the end-steeps. Not bad, and very warming on a winter day. Nice and mellow that’s for sure.

I would recommend trying it, but not recommend spending much. 15g of tea was putting out about a full kettle (2L) of tea before it started to fade out.

For what I paid that’s around 0.18 cents for 2 litres of perfectly acceptable tea. I passed some to my partner (who is not versed in tea) and they found it pretty enjoyable.