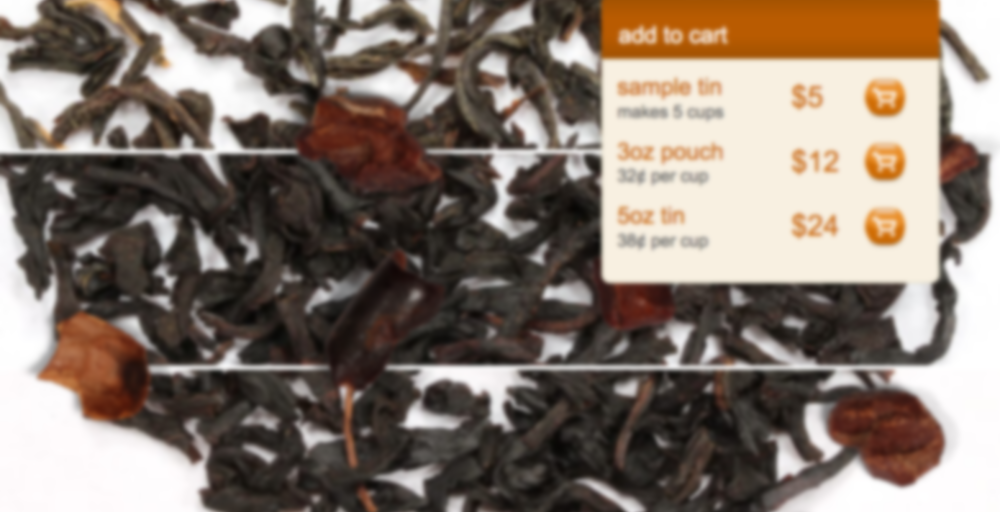 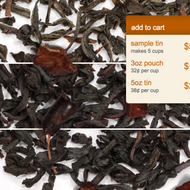 by Adagio Custom Blends
81
You

Rich and malty chocolate flavors perfect for a breakfast tea.

Thanks for the sample, mtchyg! And for mixing it.

It’s a deep black tea base with some creamy chocolate and a hint of brown sugar/caramel sweetness. I want to say that it has bread notes and raisin notes as well, but I might me crazy.

I think I’m going to have to buy a bag of this one. It’s a great dessert tea.

And tea is also ZERO SmartPoints, which is a thing I didn’t give a shit about until yesterday, when I told my husband it was GO TIME on a diet (“lifestyle change”) and I was JOINING WEIGHT WATCHERS DAMMIT and he said “okay.” (He is the chillest person alive.) (And I am, as you may have surmised from my tea blog, a flea circus of cray-cray).

I already tried to use it as a beer substitute. I brought a bunch of iced tea to a party in a big to-go tumbler to drink instead of beer.

But the party was a beer-snob microbrew kind of crowd, and they kept asking me what the heck I was drinking. I said tea, and they asked why.

Doesn’t it seem gauche to ask people why they aren’t drinking alcohol?

Maybe alcohol interferes with my medical conditions or medicines.

Maybe I like alcohol TOO MUCH and I’m in AA.

Almost ANY RESPONSE to “why aren’t you drinking?” is going to be personal. And I’d just met the people who were asking. (People who know me know that I carry tea around with me everywhere.)

I think it’s a young-person thing. People who are older tend to know the downside of alcohol a little better, are past the “party!” phase, and also, I think, just care less about what other people do.

Feel free to weigh in on any or none of this. Just getting it off my chest.

I get that too! I cannot understand why people ask things like that? I sometimes am tempted to give them a really horrible answer to shut them up. None of your business why I’m not drinking!

I’m glad you enjoyed my blend! Also, as someone who can’t drink due to a medical condition, I absolutely know how you feel. Now, I don’t mind telling people why I can’t drink alcohol but I agree with you on this one. Maybe there is a little of the “please conform with us/you think you’re better than me?” thing going on. Sometimes I’m tempted to give people funny and bullshit excuses.

I find people of all ages ask a lot of things they maybe shouldn’t ask. My sister got married back in September and is asked almost daily by literally anyone (parents, colleagues, clients, etc.) “are you and your husband trying to have a baby?”. I think that is crazy rude and since I like to mess with people who do shit like this, I told her she should look them dead in the eye and say something like “no, but me and our gardener are.” or “not since the accident”. It’s terrible to do but it would be a good lesson for people who think it is okay to ask these personal questions.

I would have just said “because I’m not drinking alcohol tonight”. And uhhh what if you were designated driver??

It blows my mind that people expect everyone else to think and do everything they personally do to a T, and if you don’t, you have to justify yourself, why you a) aren’t drinking alcohol when everyone else is, b) don’t want to be married, c) don’t want children or don’t have any yet, d) why you don’t want to have your picture taken, etc. Like seriously? What does it matter to others?

But yeah, I agree with VariaTEA that age is irrelevant. People are just ignorant.

People are ALWAYS asking me where the baby is. Sometimes I enjoy telling them the truth: “well, I’m on a bunch of antidepressants for my crippling lifetime of inexplicable sadness! And they’d make my baby derpy! So… I can’t have one!” And other times I just say “you’ll be the first to know if it happens!” because ugh. Why does everyone require a novella if you’re at all different from them?

Lol! Starling, you and I would get along really well I think. I totally agree, and I just love your personality. You do you, girl. :)