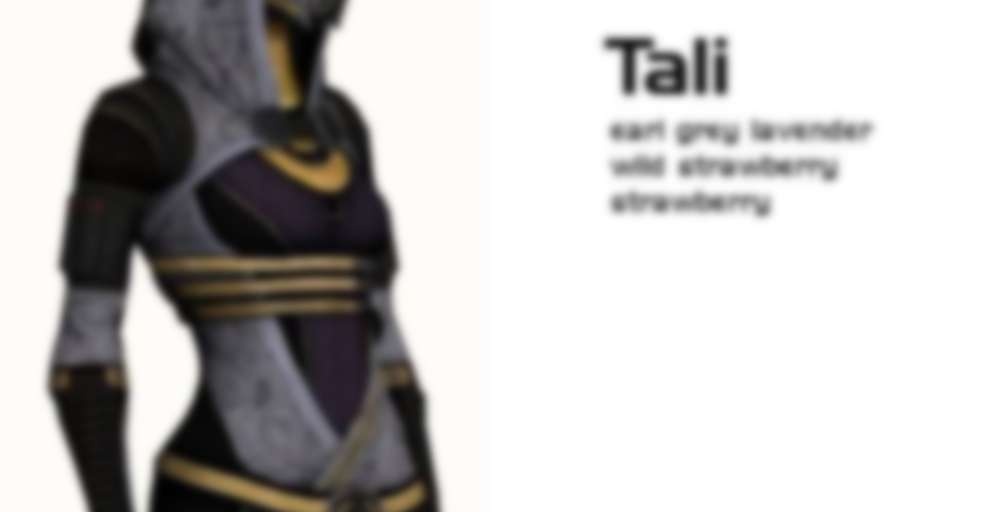 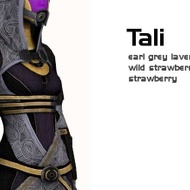 by Adagio Custom Blends
81
You

Tali likes her tea bright and sweet, with a fruity, floral twist. You’d better not say anything about it. She has a shotgun.

Inspired by the Mass Effect games from Bioware.

Okay, just trying this out now. On the Adagio home-site there is only two reviews, and one is by the blend’s creator… so here goes:

Scent
-Before Steeping: Intense strawberry scent, mixed with a little bit of earl grey, and an intense background scent of lavender. The strawberry tends to overwhelm all other scents in the blend, though.
-While Steeping: Intense strawberry scent lessens a little, supplanted by a combined scent of lavender, strawberry, and earl grey. Strong, yet not to strong. Smells really good, to tell the truth
-After Steeping: No real fruity scent, as far as I can tell. Lavender scent is still there, accompanied by rich, earthy tones.

Flavor
-1st Steep (hot): Fresh from the pot, still boiling. Added about a tablespoon or so of sugar, and let sit for a second. Not much strawberry flavor initially. Rather intense earl grey lavender flavor through, predominant throughout the still hot cup of tea. The fruitiness will probably reveal itself once it cools down a little though. Will put it in the fridge for a little, see if that helps. Choosing to forgo a second steep this time around, I have work tomorrow and it’s a little too late for a second cup (for me at least).
-1st Steep (cold): Trying this again, after leaving it to cool down in the fridge for about an hour. Still not much strawberry flavor, but it’s there and noticeable. Blends in nicely with the earl grey lavender. After leaving it to sit a little longer in the freezer, the strawberry taste really shows itself. The strawberry is strongest in the aftertaste, of course, but there is also a nice floral tone to it.

Overall: I like this, I really do. It’s an odd grouping of flavors, with the multiple strawberry flavors and the earl grey lavender. I like it best cold, or at least lukewarm. It would probably be best as an iced tea- the cold seems to bring out the strawberry and floral flavors more. I would most definitely drink this again.