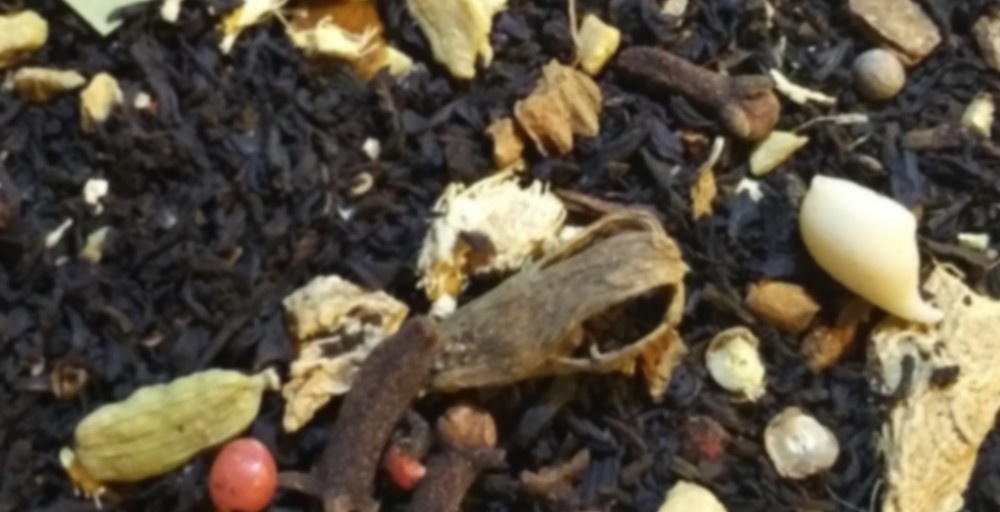 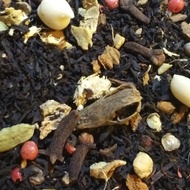 Oh, I like white chocolate OK but I certainly am not addicted to it. I could go weeks, months, even a couple of years without indulging in it & I doubt I’d even miss it. I will turn down white chocolate in many forms including white chocolate truffles & white chocolate ice cream. I probably wouldn’t turn down a freshly baked white chocolate macadamia nut cookie, but if it isn’t fresh & warm, I’d be more likely to turn it down. I guess what I’m trying to say is that – for the most part – white chocolate just comes off as too sweet for my palate. I prefer the complexity of a good quality dark chocolate over the sickly sweetness of white chocolate.

White chocolate is one of those ingredients that I’m often asked to utilize in blends more often – so I decided to craft a chai blend using black tea to answer those requests, but I wanted to make this chai a little less ordinary.

I started off ordinarily enough – with a rich blend of organic Assam teas – & added some of the “usual” masala spices: cinnamon, clove, cardamom, ginger & black pepper. Then I decided to use some pink & white peppercorns too as well as some bay leaf (white chocolate & bay leaf work together incredibly well) & of course, some white chocolate chips. (Vegan white chocolate, of course!)

The result is a delicious, warmly-spiced but not too spicy (I didn’t want to overwhelm the creaminess of the white chocolate too much), fragrant & sweet white chocolate-y cuppa yum that’s not only vegan, but also gluten-free, nut-free & all-natural!

So apparently I never reviewed this before, and now I’m sipping it down, so I better do so now! In fact, if I had known I never wrote a review of this previously, I would have tasted it before I latted it. But I didn’t so this review is of a latte.

Ok, so I will say right off the bat that I’m getting a large note of peppercorn from this. I don’t mind it, actually, it’s refreshing. Not enough chais have a strong pepper flavor, and I’m a huge fan of pepper, sooo…

There is also a very clear white chocolate flavor to this. The milk only amplifies it, and it’s heavenly. Now I’m getting sad that this is a sipdown, because I feel like I’ve been sleeping on this. It’s delicious. I’m saying now that the rest of the chai flavors besides the peppercorn are muted, but that could be the latte doing that. You can tell it’s a chai, but it isn’t a particularly spicy one. That’s fine though, I can deal with a mild chai. However, that delicious white chocolate is so good that I could drink this all day. (You know, come to think of it, the mildness could be due to the slight underleaf. As this was a sipdown, I only had what was left in the bag, and it wasn’t quite enough for my 12oz mug, so that could be why it is so weak on the spice. I also probably could have steeped it longer. Just a thought.)

I’m saying this now if this ever gets reblended, I’m getting more. It’s good stuff. Love it. Great job as usual!

This was the tea of the week for February 4. This is really tasty on it’s own – the white chocolate adds some creaminess to it – but I prefer it as a latte. Most of the chai blends that I’ve made in the past have been ones that I’d prefer served straight – this one is definitely best served as a latte and I’m loving that. Creamy, nicely spiced and just – so – good!!!

I wanted to make this one a little different, so I added bay leaf to the blend in addition to the usual masala spices of cinnamon, cardamom, clove, ginger and peppercorns (I used not just black pepper but white and pink peppercorns too). The bay leaf gives this a slight earthiness – as well as enhances the spice notes overall.

My thoughts on that are if you are enjoying it, then you made it correctly. :)

Seriously, though – that’s what it’s all about. Enjoying what you’re drinking!