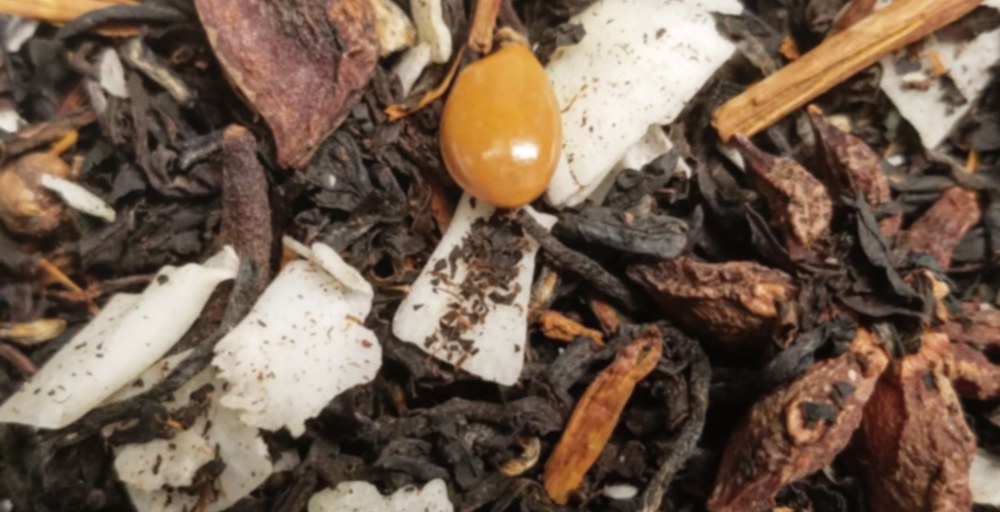 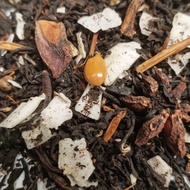 I recently obtained some organic Wild Thai Black Tea. When I ordered it, the sales rep told me that the tea had a character similar to a high grown Ceylon. When I received it and tasted it – I didn’t find it to be similar to a mild Ceylon but instead it had a bold flavor similar to an Assam: robust like a Assam, but not nearly as malty. I still quite enjoyed the tea and even though I didn’t feel like it would work very well as a component to the aforementioned blend – I decided instead that this tea would be nicer showcased in a tea inspired by some of the flavors of Thailand.

So I started with a batch of organically grown Wild Thai black tea and added some Assam to add more depth and a touch of malty to the cup and then I added a little bit of Ceylon to round out the bold flavors from the other two teas. Then I added coconut – lots of it – because when I think Thailand, I think … well, first I think Pad Thai and Crying Tiger (my two favorite dishes from my favorite Thai restaurant) … and after that, I think of Thai Iced Tea . . . but as I say that, I think I should make it clear that this is not my attempt to capture the essence of Thai Iced Tea – which is very yummy but this tea isn’t that.

Instead, this tea is a celebration of Thai flavors. And one flavor I associate with Thai is the aforementioned coconut. I also associate spices with Thailand, so I added star anise, clove and cinnamon. Strong notes of black tea and coconut, subtle background spices – this tea tastes great on its own but it’s even better served with a splash of your choice of milk (I’d recommend coconut milk!) as a latte.

This tea is organic, vegan, gluten-free and nut-free (unless you consider coconut to be a nut) and it is SO GOOD!

I didn’t love this tea plain so I shared some with a friend I thought may enjoy it but made sure to keep just enough to try as a latte. It seemed odd to through eggnog into the mix so this is just a regular latte with (dairy) milk.

Also this is another tea from 2018 (December at least) so that means along with other sipdowns from today, I am down to only 5 teas from 2018 still in my tea stash. Yay!

This makes an alright latte. The coconut sneaks in mid-sip for a sweet and creamy surprise. However, there is something about the spice blend that I am just not loving. Perhaps it is too clove heavy for my tastes. Or I think the base being rather robust combined with a heavy dose of clove is just not to my tastes. It’s not a bad tea but its just not to my preferences either and that’s okay since there are many other 52 Teas blends that are.

mmmm this is delicious. Toasted coconut (super creamy and nutty!), lightly sweet, malty and flavourful black tea base, some nice spices (clove and cinnamon). I really like this with milk as a hot morning drink or cold brewed with cold milk over ice.