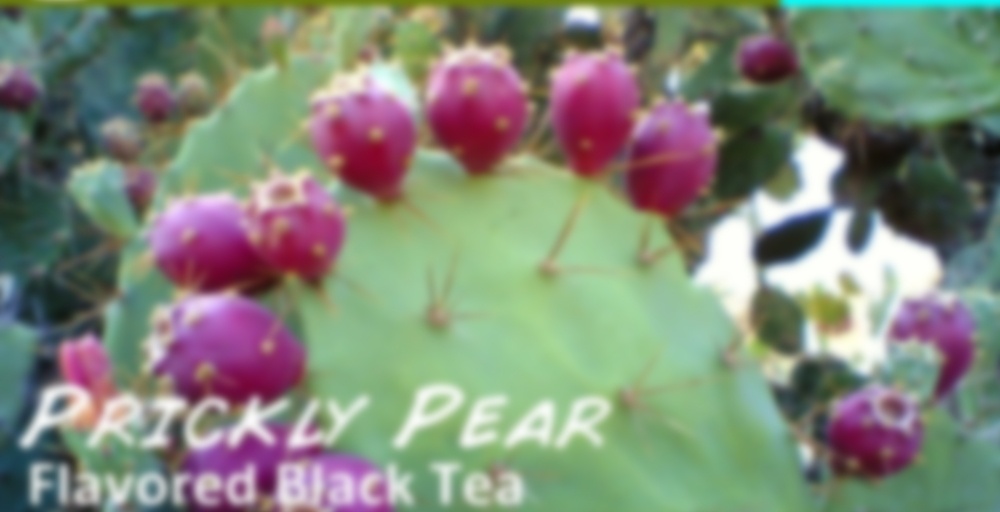 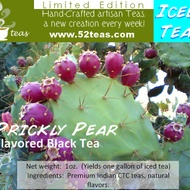 I just got finished hot brewing some of this for tomorrow’s iced tea consumption, and one of the “side effects” of utilizing the breville for brewing is that I had some “left-over” tea that did not fit in the iced tea pitcher, so rather than tossing that, I just poured it into a cup and am enjoying it now. It’s a little late for black tea, but, I figured after three infusions of the leaves, the caffeine shouldn’t be too bothersome.

This is yummy, although I do prefer it iced.

A flavored black that can go thru 3 steepings? Sweet!

So a bit back, I bought a bunch of 52Teas stuff off KeenTeaThyme, and 3 of these iced tea packets were in there: the other 2 flavors were plum and root beer. I tried making the plum one earlier but its flavor did not survive two years. When I opened this one, I smelled it first and there was that definite citrusy-sweet prickly pear scent to it, so I went ahead and made it. I made 3 quarts from the whole thing, meant for a gallon originally because I wasn’t sure after the plum one that I should go about making them as if they were new.

In fact that was a bit too strong so after I poured a glass from the 2 qt pitcher I filled it back up with water.

The flavor is definitely there! I added agave too to help bring it out. It was very nice to have by the pool yesterday, the first 90 degree day this year. Blah!

I have to go to my parents’ tomorrow and I guess I am staying till Monday, I am worried about my dad yelling at me about school and not finding a job and I really don’t want to go :/ At least Sebastian will be entertaining on the car ride, he is unphased by being covered in the car and chirps along to songs he really likes. It’s very amusing.

I received this in the mail today and had to make it as soon as possible. I have to say I had never had prickly pear before so this was going to be an adventure of sorts. I can smell and taste the yummy pear flavor in this tea even iced. SO yummy and so glad I purchased this one from Frank! I’m sure the gallon I made will be gone by tomorrow night!

Suggested Preparation:
Steep loose tea in 12-16oz of 190°-212°F(boiling or slightly under boiling) water for 4-5 minutes. Pour through a coffee filter into a one gallon pitcher. Top off the pitcher with cool water and serve over ice.

I feel bad for this tea, I need to use half the amount of leaf in the device, but am too lazy to split it in half.

I was surprised by how sweet it smelled, almost like a fruit. i was not expecting that from a cactus flavor. Honestly not sure what I was expecting from a cactus!

I wasn’t really sure what this tea would taste like since I have never had prickly pear but wow oh wow I drank this down like it was going out of style! This tea has a nice sweetness and maybe just a bit of tartness to it. It was only my second time cold brewing and it was great! I really enjoy the cold brewing method since most of the time I am hot and do not want something hot to drink. You can smell the sweetness in the tea as soon as you open up the package, it is nice and fruity. I like the fact that the flavor is bold and you can taste the prickly pear( or at least what I think it is) it is yummy!